Russia’s decision to fly long-range missions with its air force has yielded some very nice photos. Now, thanks to the Danish air force, we also have a nice video (even if a only a short one):

The Tu-95 was video was taken yesterday. The Danes were at Keflavik air base, where they are on a NATO rotation. For NATO pilots, it’s become the preferred place for Tu-95 spotting.

Two Danish F-16s were involved in the meeting.

There’s been a slew of these encounters in recent months. Here’s a snapshot:

The Eurofighter Typhoon also has had its close-up moment with the Tu-95 Bear.

Posted by Steve Douglass at 3:03 PM No comments:

Was light, booming in sky falling Russian booster or something else? 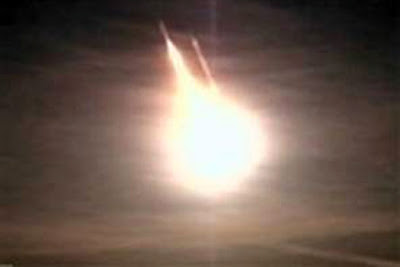 CNN) -- The mysterious burst of light in the sky and loud booms witnessed Sunday night by residents along the Mid-Atlantic coastline was likely caused by a Russian rocket booster re-entering the atmosphere, said an official at the U.S. Naval Observatory.


A mysterious flash in the sky Sunday night may have been debris from the Soyuz spacecraft's booster.

The exact cause of the flash that caused hundreds of people to call the media, local authorities and the National Weather Service was still unknown Monday afternoon. But eyewitness accounts of the color, shape and timing of the light and sound had officials at the Naval Observatory confident of the phenomenon's cause: the re-entry of orbiting space junk from the Russian Soyuz spacecraft that blasted off last week from Kazakhstan.

"An object like this will have a pretty spectacular display when it enters the atmosphere," said U.S. Naval Observatory spokesman Geoff Chester.

Monday morning after the incident, Chester said he traced the rocket booster's path and found it was hovering over Cape Hatteras, North Carolina, around the time people reported seeing the light.

Sunday's mysterious flash and booms also could have been a fireball, a natural phenomenon that occurs when a rock about the size of a suitcase slams into the earth. Naval Observatory officials say that scenario is unlikely in this case, since the space junk was already orbiting in the area.

"The visual reports are consistent with either case," he said. "But the fact that a Russian rocket booster was passing through that area of the sky at the same time, it's a pretty strong factor in my opinion to make that the culprit."

The timing of the light and sounds also indicates it was likely space debris. Chester said it usually takes up to a week for a rocket booster's orbit to decay. The Russian spaceship was launched last Thursday.

Update: This was posted at MarylandWeather.com

There has been plenty of debate today about the nature of the fireball spotted around 9:40 p.m. Sunday in the southern sky (as seen from Maryland). But I'm now convinced that it was a natural meteor, and not space debris.

Geoff Chester, spokesman for the U.S. Naval Observatory got out in front early on this story, saying he was "99.44 percent" sure the object was a Russian rocket booster, falling to Earth after the launch of the Russian Soyuz space capsule en route to the International Space Station.

I don't think so. Man-made space debris is traveling at orbital velocities, and re-enters the atmosphere at a fairly slow speed compared with meteors. We all remember the painful video images of the space shuttle Columbia breaking up on re-entry in 2003, with the loss of its crew. It is very slow compared with meteor entries.

Eyewitness descriptions of Sunday night's event said they watched this object for only a few seconds before it vanished. Here's a eyewitness comment we received this morning:

"I live along the coast on the Eastern Shore of MD. I too saw this amazing fireball. From my vantage point the bright orange ball of fire just suddenly appeared at approximately 9:40 PM. It was definitely larger than a refrigerator, as reported. It fell downward and slightly east then seemed to burn out. It only lasted about 5 seconds; however, this was the most spectacular site I have ever seen! - Jill Schline"

Now, Ted Molczan, a knowledgeable and experienced satellite watcher active with SeeSat, an international group of hobbyists who track and observe Earth satellites, says he agrees. This was not space debris. I asked him to check the orbit of the Russian rocket body, and whether it might have been what was seen by observers from Maryland to North Carolina. Here's his response:

The object was 2009-015B / 34670, the SL-4 rocket body from the recent Soyuz-TMA 14 launch to ISS. Geoff Chester of the Naval Observatory in Washington, D.C. expressed certainty that its decay is what was seen last night, but he is mistaken: http://www.livescience.com/space/090330-rocket-debris.html

It did pass within sight of the Virginia and Maryland Sunday night, but at about 9:26 PM EDT, about 2.5 hours before decay. It was 137 km high, but that is far too high to have begun burning. Burning begins a little below 100 km. The object was in Earth's shadow, so it was invisible, because it was not burning yet.

But clearly it was a meteor, based on its high angular velocity.

I observed a satellite decay five years ago, and the object took about 90 seconds to cross from a point low above the SW horizon to a point low in the SE.

That is much faster than a normal satellite, but nowhere near as fast a meteor, which could traverse the same angle in about one tenth the time.

Ted Molczan
Posted by Steve Douglass at 2:44 PM No comments:

WASHINGTON (CNN) -- U.S. Navy ships capable of shooting down ballistic missiles are being moved to the Sea of Japan, a Navy spokesman said.
The USS Chaffee is one of two destroyers headed to South Korea for an upcoming ceremony.

The USS Chaffee is one of two destroyers headed to South Korea for an upcoming ceremony.

The move came as North Korea was preparing for an expected rocket launch next month.

Later Thursday, Japan announced it was ready to fire on the rocket if any part of it enters Japanese airspace.

The U.S. ships, with powerful Aegis radar that can track ballistic missile launches, were on regularly planned deployments but were, "prepared to track a launch or more, if afforded," according to a U.S. Navy official who could not be named due to the sensitivity of the information.

The United States generally has a number of Aegis-capable ships in the Sea of Japan because of the threat posed by North Korea to launch missiles. The ships monitor the region and are designed to track and, if need be, shoot down ballistic missiles.
Posted by Steve Douglass at 9:26 AM No comments: 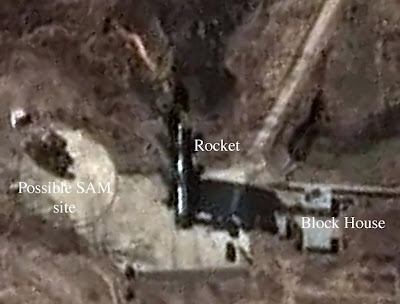 CNN) -- A North Korean rocket slated for launch sometime early next month can be clearly seen in a satellite photograph taken Sunday, the Institute for Science and International Security said Sunday.


The latest satellite image shows a rocket sitting on its launch pad in the north east of the country.
1 of 2

The satellite imagery, obtained by the ISIS from DigitalGlobe, is said to show the rocket at the Musudan-ri launch site in northeastern North Korea. The image casts a shadow on the ground below.

CNN could not independently confirm the information provided by the institute, led by former U.N. nuclear inspector David Albright. Defense Department officials were not immediately available for comment.

He also indicated that the U.S. military could be prepared to shoot down a North Korean missile if the rogue regime develops the capability to reach Hawaii or the western continental United States in a future launch.

The North Korean government says it will launch a commercial satellite atop a rocket sometime between April 4 and April 8.