As many of you know (and from the many e-mails I have received over the past couple of days) I recently appeared on a new Discovery Channel series called "Weird or What?" that began airing this week.

I was one of the so-called "experts" they called on to help solve the mystery of the "Stephenville Lights" unidentified flying objects that have been sighted in Erath County (south-central Texas) with the most notable sighting happening in January of 2008.

I won't rehash the history of Stephenville here, but you can read all bout it at this LINK. This is the second time I have been contacted for video commentary due to an article by Phil Patton. I helped research the article and I'm quoted in it. 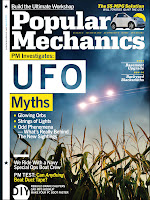 My involvement in "Weird or What" began when a producer who read the article called me last November. The series was described as a sort of Unsolved Mysteries - but where they actually solved the mysteries.

After talking to several producers (as the show was passed down from producers-to assistant producers-to field producers and finally directors) I decided to do the project under the caveat that it would not become another "UFOs are aliens -blah-blah-Area 51-blah-blah- Roswell-Alien Abductions - blah-blah "It was as big as a Wal-Mart" TV show that cable channels seem to crank out with amazing frequency.

Mine would be (as one producer eloquently put it) "The credible voice of reason and sanity among a growing cadre of UFO-crazies.

In other words-my job was to analyze the reports-talk to my sources-do a little digging and come up with an logical answer to what the good people of Erath County really witnessed.

Intrigued,I signed on to do the show even though (from experience) I know that skeptics and debunkers usually got scant camera time because no-one wants to be told what they saw wasn't the mother-ship from Zeta-Two Reticuli!"

Think about it. Would you want to watch a show about people who thought they saw a UFO but it turned out to be military aircraft? Booooooring!

Be that what it may, we shot the program on a cold wet-drizziling day in February in Dublin Texas while I was suffering with a massive dental infection.

Despite that, my interview took six hours to film. We spent two days in the area (Michael Wilhelm and myself) scanning the
local military airwaves and exploring the Brownwood MOA.

I took with me a new computer-controlled Uniden BCD996XT scanning radio and in no-time we had mapped all the military communications in the area.

BTW: the Uniden 996Xt is an excellent scanning radio-best I've ever owned and if you are thinking of getting into military monitoring this is the scanner to buy. I'll be posting a full review of the BCD996XT soon.


It was clear, after searching out all the known and discrete UHF military aero-band frequencies in the area that (despite the bad weather) the Brownwood MOA was a very active area indeed. I logged and recorded over 350 military communications.

It would have taken less time, but I was adamant about getting my point across that what the witnesses saw that night in 2008 was what amounted to a "Dog & Pony show" put on by the military to cover for a black (covert) aircraft that either was being tested in the area or inadvertently (because of a malfunction) was forced down to where the Erathlings could see it.

It was more than evident (from the military's first denial that anything was flying that night -to their sudden reversal (it was only F-16s in the Brownwood MOA) that something Skunky was going on.

I had observed this type of standard operating procedure before. It happened in Phoenix.
It happened in the Hudson Valley - and now over Stephenville.

It was a variation of any old magician's trick. When you don't want the audience to notice the ace you have hidden in your left hand, put a gold coin in the right.

As I researched the sighting and the standard procedure of disinformation began to appear, I couldn't help but be reminded of a line from The Wizard of Oz, "Pay no attention to the man behind the curtain!"

Anyway- as I watched the show the other night I was pleasantly surprised. Despite my earlier misgivings, as promised, it hadn't descended in a UFO show and wasn't actually half bad.

Most of my better points did not make the final-cut-but I expected that. The show was fairly-balanced and except for a few moments where they substituted computer-animation and photos of the XB-46 for the "Beast of Kandahar - Sentinel. but on the whole- it was fairly accurate.

The show wasn't perfect - but it wasn't pablum either. Good job Cineflix Productions! I hope the series gets picked up.

With that in mind - I just turned down doing another Discovery Channel program (Conspiracy Theory with Jesse Ventura) after a viewing their HAARP episode.

Despite the offer to fly out to Nevada (Area 51) I could see that their production company (A. Smith & Co.) really had no clue or real impetus to produce a show based on getting at the truth but it was more about a personality - Jesse Ventura as "The body and the brain" and also netting high ratings.


The truth ain't sexy - but UFOs are and UFO crazies are.

But enough about a bad show. Weird or What is much better.

If you didn't see the show, you can download a bit-torrent of the video here: LINK

You'll need a bit-torrent client such as Vuze to assemble it.