Watch out for on-the-spot reporting later from Bettina Chavanne at the Quad-A show, where Sikorsky has taken the wraps off a full-scale mockup of its X2 Technology Light Tactical Helicopter (LTH) concept.

A much smaller model of the coaxial-rotor LTH has been making the rounds of the shows for a year or so now, so the mockup's unveiling at the Army Aviation Association of America show is significant. The Army is looking for an armed reconnaissance helicopter to replace the cancelled Bell ARH-70, but says its recent request for information showed nothing was available off the shelf to meet its requirements. So it's gone back to square one and started a new analysis of alternatives.

Sikorsky, meanwhile, says it couldn't'deliver the high-speed X2 LTH before 2017-18, so its strategy seems to be to offer the Army the carrot of a completely new capability - if it can soldier on for a few more years with a combination of Kiowa Warriors, Apaches and unmanned aircraft in the armed scout role. The X2 would bring high speed with helicopter agility and the ability to go from the hover to 250kt and back without any rotary/fixed-wing mode changes.

Sikorsky's X2 Technology demonstrator is due back in the air shortly after the final mods to prepare for high-speed testing - connecting the pusher prop, fairing over the rotor hubs and making the gear retractable. The company expects to'pass its 250kt speed target by year end - which should mean the results will be available in time for consideration by the Army as it analyzes its alternatives.

Posted by Steve Douglass at 6:09 PM No comments:

'We can sink a RIB (rigid inflatable boat) at 100 meters,' remarks a representative of a joint program between Raytheon's marine radar unit and Unifire, Sweden-based specialist in firefighting equipment. At the IMDEX maritime defense show in Singapore earlier today, Unifire and Raytheon unveiled their joint approach to non-lethal defense against typical pirate attacks.

The keys are that large ships often already carry water cannon for firefighting and that they are not regarded as weapons - which demand special training and may cause a ship to be restricted in using international commercial ports. Also, in addition to being powerful enough 'to send an 85 kg barrel flying end over end at 75 meters', Unifire's water cannon systems are already equipped with precise, responsive joystick remote control systems so that operators are not exposed on deck.

The system is non-lethal and variable in its effects. With pepper-spray irritant, it is effective out to 200 m. Even if pirates take cover against the water blast at shorter ranges, 5000 liters of water a minute are apt to have a negative effect on a small boat.'

Raytheon's contribution to the defense package is a small-craft tracking system that comprises a special processor linked to the ship's existing navigational radar. A land-based version is already operational in Spain and the Netherlands Antilles, for coastal surveillance against small, fast craft.

The processor sifts through short-range clutter for moving target tracks, using scan-to-scan and multi-hypothesis tracking to even pick up targets that may only appear in one out of three sweeps. A digital camera can be slaved to the radar for positive ID. Unifire has developed a networking system which connects the water cannon to the radar and camera displays.

Posted by Steve Douglass at 6:06 PM No comments: 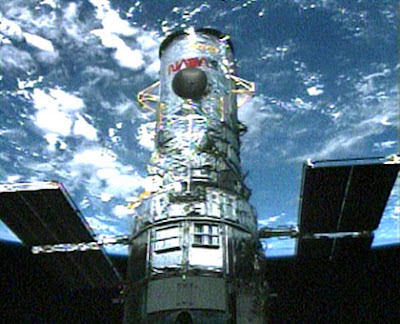 VIEW IT LIVE HERE.
Posted by Steve Douglass at 6:19 AM No comments: