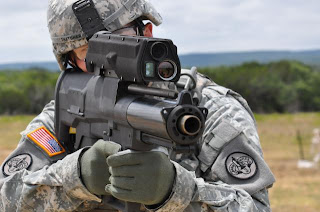 WASHINGTON (Army News Service, Feb. 3, 2011) -- Only five XM25 weapons exist today, but Soldiers lucky enough to have used them in Afghanistan are saying more are needed.

Two Soldiers took the prototype weapons into theater to link them up with requesting units. They trained troops on the weapon's use and managed the Forward Operational Assessment to collect information about the weapon's performance in theater and how Soldiers used it.

"The XM25 brought the difference to whether they would stay there 15 to 20 minutes shooting (and) taking pot shots or the actual fight ended after using the XM25," said Sgt. 1st Class Carlos Smith, Soldier Requirements Division, Maneuver Center of Excellence, Fort Benning, Ga. "That was due to the defilade capabilities of the XM25 to shoot beyond targets and behind targets."

The XM25 allows Soldiers to engage defilade targets -- those behind a barrier, protected from oncoming weapons fire. The XM25 measures the distance to the enemy's protective barrier, and can then program the round to detonate a user-adjustable distance past that -- allowing Soldiers to put an air-bursting round directly above the enemy's head, inside their protected area.

The round measures the distance it travels by counting its own rotations after leaving the barrel.

Both Smith and Maj. Christopher Conley, an assistant product manager for Program Manager Soldier Weapons, at Picatinny Arsenal, N.J., were part of the team that brought those weapons into theater for Soldiers to use in actual combat. The five prototype weapons entered theater in November, and were first used in combat Dec. 3.

Since then, hundreds of XM25 rounds have been fired in theater, though only 55 of those rounds were fired as part of combat, on nine different operational missions.

"We disrupted two insurgents on an OP (observation point) and we silenced two machine-gun positions -- two PKM positions," Conley said, describing some of the scenarios he witnessed in theater where the XM25 had been used. "We destroyed four ambush locations, where the survivors fled."

"And when we launched it at a longer range target, who was carrying a machine gun and it exploded near his target -- it either badly wounded him or scared him good enough that he dropped his machine gun and ran away," Conley recalled.

"The troops are very excited to carry it," Conley said. "We've limited who can carry it based on the number of folks that we've trained. But within that group of Soldiers that are trained on the operation of the XM25, I heard a Soldier say 'hey, he carried it yesterday, so I get it today.'"

Some Soldiers who've used the XM25 in Afghanistan had taken to naming the weapon -- though there is no official name for the system yet.

"The kids are calling it 'the Punisher,'" said Brig. Gen. Peter N. Fuller, who heads up the Program Executive Office Soldier. "I don't know what we're going to title this product, but it seems to be game-changing. You no longer can shoot at American forces and then hide behind something. We're going to reach out and touch you."


READ THE FULL STORY HERE
Posted by Steve Douglass at 1:50 PM No comments:

Athens-based shipping company Enesel said they had lost communication with the Irene SL.

Although the incident happened hundreds of miles from Somalia, pirate gangs are known to operate there.

"This morning the vessel was attacked by armed men," said Enesel in a statement quoted by Reuters.

"For the moment there is no communication with the vessel."

Greece's Merchant Marine Ministry told the Associated Press that the ship was carrying 266,000 tons of crude oil. It is believed to be one of the largest vessels ever seized.

It has a 25-member crew including seven Greeks, 17 Filipinos and one Georgian, according to the ministry.

The EU's naval mission in the region Eunavfor said in a statement on its website the Irene was sailing 400 miles (650km) south-east of Muscat.


The incident comes a day after pirates took control of an Italian oil tanker in the Indian Ocean, some 800 miles from Somalia's coast.

Before the latest incident, Eunavfor said pirates were currently holding 29 vessels along with an estimated 681 hostages.

Somali pirates have made millions of dollars in recent years by capturing cargo vessels in the shipping lanes around the Horn of Africa and holding the ships and crew for ransom.

Somalia has had no functioning central government since 1991, allowing piracy to flourish off its coast.
Posted by Steve Douglass at 10:41 AM No comments:

Washington (CNN) -- The terrorist threat to the U.S. homeland has continued to "evolve" and may now "be at its most heightened state" since the September 11, 2001, terror attacks, Homeland Security Secretary Janet Napolitano told members of Congress on Wednesday.

There is an increased reliance on recruiting Westerners into terrorist organizations, she told the House Homeland Security Committee. State and local law enforcement officers are increasingly needed to combat terror, and the focus must be on aiding law enforcement to help them secure communities, she said.

Along with the joint terror task force led by the FBI, the nation's four-pronged counterterrorism response includes locally run "fusion centers" aimed at facilitating intelligence-sharing and analysis; a nationwide reporting initiative for suspicious acts; and the "If you see something, say something" campaign designed to "foster public vigilance," she said. The campaign has been rolled out at major public events such as the Super Bowl and at retail centers, Napolitano said.
In addition, as previously announced, authorities are replacing the color-coded terror alert system with a more useful one, she said. The new system will reflect the nation's need to be ready while also keeping the public as informed as possible, she said.

The most significant risk to the United States is probably posed by al Qaeda in the Arabian Peninsula and Anwar al-Awlaki, said Michael Leiter, the director of the National Counterterrorism Center. The American-born Muslim cleric has close ties to al Qaeda.

Al Qaeda is at its weakest point in the last decade, but remains "a very determined enemy," he said, noting there have been five disrupted plots in Europe in the last five years.
Authorities are also watching groups such as the one behind the 2008 attacks in Mumbai, India, Lashkar-e-Tayyiba; Hezbollah; Greek anarchists like the ones thought to have sent letter bombs to embassies.

READ THE FULL STORY AT CNN
Posted by Steve Douglass at 10:35 AM No comments: