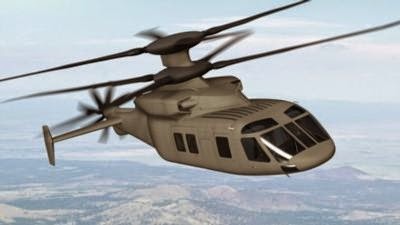 
The U.S. Army Aviation Technology Directorate (AATD) selected the Sikorsky-Boeing team to continue the development of the SB>1 Defiant, a medium-lift helicopter configured to Sikorsky's X2™ coaxial design, through flight testing. First flight for the program is expected in 2017.

"Defiant will use Sikorsky's proven X2 technology to overcome aircraft design challenges, which will be critical requirements on future vertical lift aircraft," said Mick Maurer, Sikorsky president. "The Sikorsky-Boeing team's integrated approach has created a unique blend of expertise, innovative spirit and customer commitment that are unmatched in the industry. The complementary capabilities of each team member have delivered a design that will provide the best future vertical lift solution to the U.S. Army, and the flexibility of our design makes it suited for naval applications as well. This is a major leap forward."

The Defiant aircraft will feature counter-rotating rigid main rotor blades for vertical and forward flight, a pusher propeller for high-speed acceleration and deceleration and an advanced fly-by-wire flight control system.

"Our team brings leadership and new ways of thinking to aircraft development," said Shelley Lavender, president of Boeing Military Aircraft. "As the original equipment manufacturers for both the Black Hawk and Apache helicopters, we bring tremendous technological breadth and depth to the customer. I believe our technical capabilities and experience in development and flight testing of complex rotorcraft systems were a key factor in the customer's decision."
To date, Sikorsky and Boeing collectively have delivered more than 3,000 helicopters to the Army in support of its challenging missions.

The JMR TD program supports the Department of Defense's Future Vertical Lift (FVL) program to deliver the next generation of vertical lift aircraft with greater performance, reliability and affordability. The Defiant aircraft packages evolutionary technologies in a new, innovative and affordable design that flies faster, farther and with more payload.
The JMR TD Program offers Sikorsky and Boeing the opportunity to partner with the U.S. Government in demonstrating the maturity of advanced and enabling future vertical lift technologies. Sikorsky and Boeing formed their JMR team inJanuary 2013, and each company has invested significantly in the program.

Sikorsky Aircraft Corp., based in Stratford, Connecticut, is a world leader in aircraft design, manufacture and service. United Technologies Corp., based inHartford, Connecticut, provides high-technology products and support services to the aerospace and building systems industries.
A unit of The Boeing Company, Boeing Defense, Space & Security is one of the world's largest defense, space and security businesses specializing in innovative and capabilities-driven customer solutions, and the world's largest and most versatile manufacturer of military aircraft. Headquartered in St. Louis, Boeing Defense, Space & Security is a $33 billion business with 56,000 employees worldwide. Follow us on Twitter: @BoeingDefense.

This press release contains forward-looking statements concerning opportunities for development and potential production of helicopters. Actual results may differ materially from those projected as a result of certain risks and uncertainties, including but not limited to changes in government procurement priorities and practices, budget plans, availability of funding and in the type and number of aircraft required; challenges in the design, development, production and support of advanced technologies; as well as other risks and uncertainties, including but not limited to those detailed from time to time in filings submitted by UTC and by Boeing to the Securities and Exchange Commission.

Distribution Statement A: Approved for public release; distribution is unlimited.
Posted by Steve Douglass at 2:53 PM No comments: