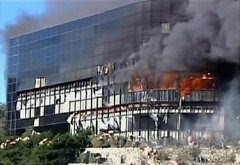 CNN) -- An Austin, Texas, resident with an apparent grudge against the Internal Revenue Service set his house on fire Thursday and then crashed a small plane into a building housing an IRS office with nearly 200 employees, officials said.
Federal authorities identified the pilot of the Piper Cherokee PA-28 as Joseph Andrew Stack, 53.

Two people were injured and one person was missing, local officials said. There were no reported deaths.
A message on a Web site registered to Stack appears to be a suicide note.

"If you're reading this, you're no doubt asking yourself, 'Why did this have to happen?' " the message says. "The simple truth is that it is complicated and has been coming for a long time."
In the lengthy, rambling message, the writer rails against the government and, particularly, the IRS.
The building into which the airplane crashed is a federal IRS center with 199 employees.

See text of the note (PDF)

"I saw it written once that the definition of insanity is repeating the same process over and over and expecting the outcome to suddenly be different," the online message says. "I am finally ready to stop this insanity. Well, Mr. Big Brother IRS man, let's try something different; take my pound of flesh and sleep well."
Video: Pilot targets Texas building Video: Plane into Texas building Video: Plane 'exploded into fireball' Video: Plane crashes into building

Two people were transported to University Medical Center Brackenridge, said hospital spokeswoman Matilda Sanchez. She could not provide additional information.
University Medical Center Brackenridge is the only Level 1 trauma center for adults in Austin.
St. David's Medical Center, the other major hospital in the area, said it had not received any patients.
Austin Mayor Lee Leffingwell said one person remained unaccounted for Thursday afternoon.
He tried to calm any concerns residents could have about the crash and the huge fire, which he said was mostly contained.
"It is an isolated incident," the mayor said. "The people of Austin, the people of the nation, are in no danger whatsoever."
He added that "there is evidence that the gas tank was just about full. ... That amount of gasoline ... can do a lot of damage."
Witnesses described an infernal scene that shook nearby buildings and sent fire and smoke bellowing into the sky.
"I just saw smoke and flames," said CNN iReporter Mike Ernest. "I could not believe what I was seeing. It was just smoke and flames everywhere."

The crash occurred around 10 a.m. (11 a.m. ET).
Firefighters used two ladder trucks and other equipment to hose down the blaze at the Echelon office building, which police said is in the 9400 block of Research Boulevard.
The flames seemed mostly extinguished about 75 minutes later.

Jack Lillis, an attendant at Georgetown airport, said initial indications are that the flight originated there but there were conflicting reports and he could not verify that information.


The pilot evidently did not file a flight plan, the FAA said. No flight plan was required because the pilot was flying under visual flight rules, or VFR.

Two F-16 fighter jets were sent from Houston as a precaution, but federal authorities said preliminary information did not indicate any terrorist connection to the crash.

"We do not yet know the cause of the plane crash," the Department of Homeland Security said in a release. "At this time, we have no reason to believe there is a nexus to terrorist activity. We continue to gather more information, and are aware there is additional information about the pilot's history."
Posted by Steve Douglass at 1:27 PM No comments:

United 747 diverted to Salt Lake City due to bomb threat.

Korzep says the 193 passengers and six crew remain on board United Flight 741 and that there are buses waiting to transport passengers to the terminal when the all-clear is given.

Korzep had no details on the threat. The FBI in Salt Lake City said it couldn't confirm anything.

A United spokesperson says the flight was diverted as a precaution. The flight originated in Denver.

Closing in on UBL? Another Taliban leader captured.

Another Taliban leader captured in Pakistan
At least one other Taliban leader has been seized in neighboring Pakistan by security forces, sources tell CNN. Mullah Abdul Salam was arrested last week, according to Afghan government officials, Taliban sources and a U.S official.

"The Taliban is down another shadow governor," the American source said, declining to be named because of the sensitivity of the information.

Salam was arrested in Pakistan, the Afghan government and Taliban sources agree, but they named different cities as the location of his capture. Governor Muhammad Omar of Afghanistan's Kunduz province said he was detained in Quetta - where the Afghan Taliban reportedly has its leadership councils. The Taliban sources said he was nabbed in Faisalabad.

Salam is believed to be the Taliban commander for Kunduz province, Omar said.

He was directing Taliban military operations in the province, including ordering terrorist actions, mine planting and suicide attacks, said Abdul Razaq Yaqubi, the chief of police in Kunduz.

Yaqubi said Salam and another Taliban "shadow governor," Mullah Salih, were arrested in the Pakistani city of Peshawar last week. He said the information came from Pakistani authorities. Salih was the shadow governor of Baghlan province, the police chief said. There was no immediate confirmation of Salih's arrest.

Word of Salam's arrest comes days after news of the capture of the Afghan Taliban's reputed second-in-command, Mullah Abdul Ghani Baradar. Taliban sources and Omar said several other suspected members of the Afghan Taliban were arrested with Salam, but their identities are not clear.

–CNN's Pam Benson in Washington and journalist Mati Matiullah in Kabul contributed to this report.
Posted by Steve Douglass at 8:50 AM No comments: