Hypersonics and the B-1 - talk at Dyess AFB gives clues to deployment. 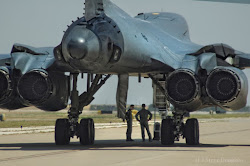 Two officials from Boeing, including former Dyess Air Force Base commander Robert  Gass, detailed efforts to speed hypersonic weapons capabilities for U.S. at the quarterly meeting Tuesday of the Military Affairs Committee of the Abilene Chamber of Commerce.

Specifically, each spoke to how that would affect the B-1B bomber. Until the full use of the B-21, which is due at Dyess no earlier than the mid-2020s, it's essential, they said, that the B-1 continue to be a first-choice bomber option. The durable B-52 also is up for modernization, again meaning the B-1 mission is vital in the interim.

Gass, who left Dyess in 2010 and retired as vice commander of the 8th Air Force, now is strategic development and investment manager for Boeing's bombers program. Both Gass and Dan Ruder, B-1 advanced programs manager, work in Oklahoma City.

The plan basically is to reactivate the capabilities of the B-1 to accommodate these kinds of weapons that are fired externally. He called hypersonic weapons "the next big thing in bombers."

Asked if that also meant the B-21, currently in development, Ruder only could speak to outfitting the B-1 for this capability.

DefenseNews reported recently that five test B-21 Raiders are in production in Palmdale, Calif. A first test flight could come in 2022.

Gass said hypersonic weapons "go real fast," which drew chuckles for its simplicity. They found out later from Ruder that fast means Mach 20, or more than 14,000 mph.

There are six "hard points" on the aircraft, however, that, with work and "sustainment dollars," the B-1 again can be made ready.

"It's not going to be cheap," Ruder said. The project will have to navigate tighter defense budgeting - "headwinds," Gass called it.

Gass said only the B-1s still active will be fitted for hypersonic missiles. The 17 Lancers sent to the "boneyard" for storage at Davis-Monthan Air Force Base, Arizona, to his knowledge, will not be part of this program.

To outfit the bomber, Ruder said a "load adaptive modular," or LAM, pylon concept has been developed that will allow two missiles to be attached to the bomber at the six points.

The target goal for development is September 2022, when testing could begin.

The biggest missiles, he said, weigh 5,000 pounds and are more than 20 feet in length. A bomber is needed as opposed to a lighter weight fighter to house more missiles.

There are several hypersonic programs in development, Gass said, so as "not to put all of our eggs in one basket."

Posted by Steve Douglass at 11:52 AM No comments: