What do you do when you are piloting a brand spanking new multi-million dollar MV-22 Osprey and the winds begin to gust in excess of 40 mph?

...and when the gusts are beyond limits you put it down quickly - somewhere -- anywhere!

Once safely down you then check your instruments - and your shorts ... wait for the gusts to subside ...

... and land it on the runway alongside the F-18 jockeys who you hope didn't see what you almost just did.

-Steve
Posted by Steve Douglass at 8:11 PM No comments: 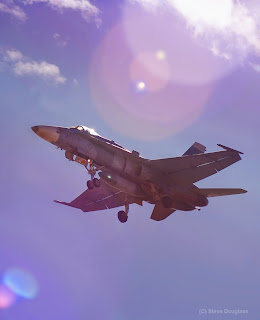 Out at the airport (Rick Husband/Amarillo Int.) today there was a free air show - of sorts. The pattern was filled with military aircraft, including two F-18s on their way to Red Flag - two V-22 Ospreys doing test work ( with one of them almost loosing it in the high winds) several assorted KC-135 tankers from Altus AFB, OK and even a Navy E-6 (TACAMO) doomsday aircraft.

Here are a couple shots of a Navy Aggressor FA/18 from VFC-12 NAS Oceana all decked out in a Russian paint scheme. These guys play the bad guys at Red Flag, and true to form he flipped me the bird when he saw me taking pictures of him!

I had a great day none-the-less. I'll post more later. 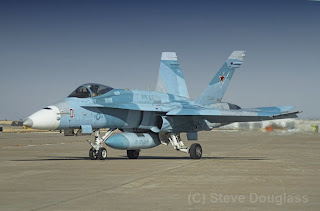 Posted by Steve Douglass at 6:57 PM No comments: