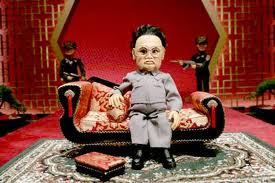 The sanctions will hit eight North Korean "entities" and four individuals, targeting the trade in arms, luxury goods and narcotics.

The new sanctions come after the sinking of a South Korean warship in March, in which 46 sailors died.

The US Treasury Department said the sanctions were aimed "at freezing the assets of [weapons of mass destruction] proliferators and their supporters thereby isolating them from the US financial and commercial systems".

Secretary of State Hillary Clinton announced last month that US sanctions against North Korea would be expanded.

North Korea indicated last year that any attempt to blockade the country would be regarded as an "act of war".

The country has been seeking nuclear weapons for some years and carried out its second nuclear test last year, prompting international condemnation.

The BBC's Laura Trevelyan says current US policy is to ratchet up economic sanctions against the North and carry out joint American-South Korean naval exercises.

But analysts say even as these new sanctions are announced, the State Department is debating whether to take a new approach, as there is little evidence that North Korea is either retreating from its nuclear programme or being less belligerent towards its neighbour South Korea.

The comments came as confirmation that Mr Kim was in China at the weekend, his second visit to the country this year.

Mr Kim, who is believed to be ailing after suffering a stroke two years ago, rarely travels abroad, but last visited China in May.

His son Kim Jong-un, who observers believe is being prepared to take over the leadership, is widely speculated to have accompanied him on his latest visit, but this has not been confirmed.

Correspondents say the trip could have been aimed at securing Beijing's backing for the eventual handover of power.
Posted by Steve Douglass at 7:22 PM No comments:

Who cares about the USS Cole?

The decision at least temporarily scuttles what was supposed to be the signature trial of a major al-Qaeda figure under a reformed system of military commissions. And it comes practically on the eve of the 10th anniversary of the attack, which killed 17 sailors and wounded dozens when a boat packed with explosives ripped a hole in the side of the warship in the port of Aden.

In a filing this week in the U.S. Court of Appeals for the District of Columbia, the Justice Department said that "no charges are either pending or contemplated with respect to al-Nashiri in the near future."

The statement, tucked into a motion to dismiss a petition by Nashiri's attorneys, suggests that the prospect of further military trials for detainees held at Guantanamo Bay, Cuba, has all but ground to a halt, much as the administration's plan to try the accused plotters of the Sept. 11, 2001, attacks in federal court has stalled.

Only two cases are moving forward at Guantanamo Bay, and both were sworn and referred for trial by the time Obama took office. In January 2009, Defense Secretary Robert M. Gates directed the Convening Authority for Military Commissions to stop referring cases for trial, an order that 20 months later has not been rescinded.

Military officials said a team of prosecutors in the Nashiri case has been ready go to trial for some time. And several months ago, military officials seemed confident that Nashiri would be arraigned this summer.

"It's politics at this point," said one military official who spoke on the condition of anonymity to discuss policy. He said he thinks the administration does not want to proceed against a high-value detainee without some prospect of civilian trials for other major figures at Guantanamo Bay.

A White House official disputed that.

"We are confident that the reformed military commissions are a lawful, fair and effective prosecutorial forum and that the Department of Defense will handle the referrals in an appropriate manner consistent with the interests of justice," said the official, who also spoke on the condition of anonymity.

The Defense Department issued a statement Thursday saying the case is not stalled. "Prosecutors in the Office of Military Commissions are actively investigating the case against Mr. al-Nashiri and are developing charges against him," the statement said.

With the 10th anniversary of the Cole bombing approaching on Oct. 12, relatives of those killed in the attack expressed deep frustration with the delay.

"After 10 years, it seems like nobody really cares," said Gloria Clodfelter, whose 21-year-old son, Kenneth, was killed on the Cole.
Posted by Steve Douglass at 10:25 AM No comments:

The Reluctant Commander in Chief .. sometimes.


WASHINGTON — President Obama rushed to the Oval Office when word arrived one night that militants with Al Qaeda in Yemen had been located and that the military wanted to support an attack by Yemeni forces. After a quick discussion, his counterterrorism adviser, John O. Brennan, told him the window to strike was closing.
“I’ve got two minutes here,” Mr. Brennan said.
“O.K.,” the president said. “Go with this.”

He is the first president in four decades with a shooting war already raging the day he took office — two, in fact, plus subsidiaries — and his education as a commander in chief with no experience in uniform has been a steep learning curve. He has learned how to salute. He has surfed the Internet at night to look into the toll on troops. He has faced young soldiers maimed after carrying out his orders. And he is trying to manage a tense relationship with the military.

Along the way, he has confronted some of the biggest choices a president can make, often deferring to military advisers yet trying to shape the decisions with his own judgments — too much at times for the Pentagon, too little in the view of his liberal base. His evolution from antiwar candidate to leader of the world’s most powerful military will reach a milestone on Tuesday when he delivers an Oval Office address to formally end the combat mission in Iraq while defending his troop buildup in Afghanistan.

A year and a half into his presidency, Mr. Obama appears to be a reluctant warrior. Even as he draws down troops in Iraq, he has been abundantly willing to use force to advance national interests, tripling forces in Afghanistan, authorizing secret operations in Yemen and Somalia, and escalating drone strikes in Pakistan. But advisers said he did not see himself as a war president in the way his predecessor did. His speech on Tuesday is notable because he talks in public about the wars only sporadically, determined not to let them define his presidency.
Posted by Steve Douglass at 8:57 AM No comments:

North Korea Will Use Nukes If North Korea is attacked by U.S. and South Korean forces, "we will respond with a sacred war based on the strength of our nuclear deterrent forces," Kwon said.

"Our government will make an effort towards the denuclearization of the peninsula and the establishment of a system of lasting peace based on the principle of the reunification of both Koreas," Kwon said, according to Prensa Latina.

North Korea was prepared for a "retaliatory sacred war," North Korea's National Defense Commission (NDC) said in a statement carried then by the official Korean Central News Agency (KCNA).
Posted by Steve Douglass at 6:20 AM No comments: