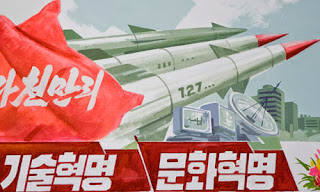 With tension growing markedly, the Korean peninsula is the closest it has been to a "military clash" since Pyongyang's first nuclear test in 2006, an influential state-run Chinese newspaper said today.

North Korea should halt any plans for nuclear and missile activities "for its own security", the Global Times said in an editorial.

While widely read in China and run by the ruling Communist Party's official People's Daily, the Global Times does not represent government policy.

Tension has escalated sharply on the Korean peninsula amid concerns that reclusive North Korea could soon conduct a sixth nuclear test or more missile launches and President Donald Trump's threat of unilateral action to solve the problem.

President Trump, who has urged China to do more to rein in its impoverished ally and neighbour, said on Twitter that North Korea was "looking for trouble" and the United States would "solve the problem" with or without Beijing's help.

Officials from the North, including leader Kim Jong Un, have indicated an intercontinental ballistic missile test or something similar could be coming.

Saturday will be the 105th birthday of the "Great Leader."

The U.S. also recently sent the aircraft carrier USS Carl Vinson along with its accompanying strike group to the area to conduct naval exercises with the South Korean Navy. The group was also sent as a show of force directed at the North Korean military.

North Korean state media warned on Tuesday of a nuclear attack on the US in light of US Navy operations. North Korea’s state run Rodong Sinmun newspaper stated, “Our revolutionary strong army is keenly watching every move by enemy elements with our nuclear sight focused on the U.S. invasionary bases not only in South Korea and the Pacific operation theater but also in the U.S. mainland.”

The Carl Vinson Strike Group started its move on Saturday, leaving its deployment to Singapore for patrols of the South China Sea. It includes an aircraft carrier and several destroyers.

SOURCES:
Posted by Steve Douglass at 9:21 AM No comments: