"The 33-megajoule shot means the Navy can fire projectiles at least 110 nautical miles, placing Sailors and Marines at a safe standoff distance and out of harm's way, and the high velocities achievable are tactically relevant for air and missile defense," he said. "This demonstration moves us one day closer to getting this advanced capability to sea."

Besides the extended ranges, the railgun also improves safety for Sailors and Marines because it will eliminate the need for a high-energy explosive warhead and traditional gun propellants. Removing explosives and chemicals will reduce the munitions logistic chain.

A megajoule is a measurement of energy associated with a mass traveling at a certain velocity. In simple terms, a one-ton vehicle moving at 100 mph equals a megajoule of energy.

In 2008, ONR conducted a 10-megajoule shot for media and visitors at Dahlgren. Today's demonstration showed researchers are steadily progressing toward developing a gun that could hit targets almost 20 times farther than conventional ship combat systems. A 33-megajoule shot, for example, could potentially reach extended ranges with Mach 5 velocity, five times the speed of sound.


Posted by Steve Douglass at 4:12 PM No comments:

(Reuters) - The U.S. Air Force has blocked employees from visiting media websites carrying leaked WikiLeaks documents, including The New York Times and the Guardian, a spokesman said on Tuesday.

Major Toni Tones, a spokeswoman at Air Force Space Command in Colorado, said the command had blocked employees whose computers are connected to the Air Force network from accessing at least 25 websites that have posted WikiLeaks documents.

The Air Force "routinely blocks Air Force network access to websites hosting inappropriate materials or malware (malicious software) and this includes any website that hosts classified materials and those that are released by WikiLeaks," she said.

The Air Force move comes as the U.S. government seeks to minimize the damage from WikiLeaks' release of 250,000 State Department cables through media outlets and on its own website.

The cables released last month, which reveal blunt, sometimes derisive depictions of foreign governments and leaders, have been an embarrassment for Washington.

Past releases this year by WikiLeaks contained sensitive information about the wars in Iraq and Afghanistan, which Washington said compromised national security and put people at risk.
Posted by Steve Douglass at 4:08 PM No comments:

Posted by Steve Douglass at 6:00 AM No comments:

Voyager on the edge of our Solar System 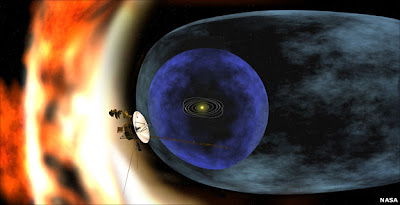 Voyager 1, the most distant spacecraft from Earth, has reached a new milestone in its quest to leave the Solar System.

Now 17.4bn km (10.8bn miles) from home, the veteran probe has detected a distinct change in the flow of particles that surround it.

These particles, which emanate from the Sun, are no longer travelling outwards but are moving sideways.

It means Voyager must be very close to making the jump to interstellar space - the space between the stars.

Edward Stone, the Voyager project scientist, lauded the explorer and the fascinating science it continues to return 33 years after launch.


"When Voyager was launched, the space age itself was only 20 years old, so there was no basis to know that spacecraft could last so long," he told BBC News.

"We had no idea how far we would have to travel to get outside the Solar System. We now know that in roughly five years, we should be outside for the first time."

Dr Stone was speaking here at the American Geophysical Union (AGU) Fall Meeting, the largest gathering of Earth scientists in the world.

The Nasa probes' initial goal was to survey the outer planets Jupiter, Saturn, Uranus and Neptune, a task completed in 1989.

They were then despatched towards deep space, in the general direction of the centre of our Milky Way Galaxy.

Sustained by their radioactive power packs, the probes' instruments continue to function well and return data to Earth, although the vast distance between them and Earth means a radio message now has a travel time of about 16 hours.

The newly reported observation comes from Voyager 1's Low-Energy Charged Particle Instrument, which has been monitoring the velocity of the solar wind.

This stream of charged particles forms a bubble around our Solar System known as the heliosphere. The wind travels at "supersonic" speed until it crosses a shockwave called the termination shock.

At this point, the wind then slows dramatically and heats up in a region termed the heliosheath. Voyager has determined the velocity of the wind at its location has now slowed to zero.