Miscalculations have defined the Georgian-Russian conflict. Georgia thought it could get away with occupying South Ossetia; Russia anticipated a militarily and politically painless counter-attack.

All of these missteps are now connected to the huge, international concern about oil and the prizes it brings with it.

Early reports indicate that pipelines running through Tbilisi from the Caspian Sea oil fields were targeted unsuccessfully by the Russian air force, which employed front-line Tu-22M3 bombers in the conflict. The stout Georgian air defenses, one of the few effective elements of the country's military, have shot down some Russian Su-25s with shoulder-fired, surface-to-air missiles (SAMs), say European-based U.S. officials. The heavier SA-11 Buk-1M also appears to have contributed to the Frogfoot strike-fighter losses and was certainly the cause of the Backfire bomber's loss, say U.S.-based analysts.

In recent years, Russia has used the cutoff of oil exports to punish Latvia and Estonia. Intercepting or damaging the Georgian pipelines would be a heavy blow. But simply the insecurity to oil supplies that fighting in the region has triggered could do even greater harm, both to Georgia and the West, if investors chose to buy oil through more secure venues. Russia also fired at least 15 SS-21 Tochka/Scarab short-range ballistic missiles at Georgian military targets during Aug. 8-11, according to Washington-based U.S. officials. They have a range of 70-120 km. (43-75 mi.), enough to threaten the Black Sea oil terminal at Supsa, Georgia.

At least one of the pipelines was also near the line of farthest advance by the Russian army between Gori and Tbilisi. Georgian officials thought the three major pipelines that go through Georgia would buy them political and economic stability and the support of the West, whose economies are being battered by high oil prices. However, these pipelines offer direct economic competition to Russian ones, so this could be a factor in Russia's overwhelming military foray.

Russia relied on long-range tube and rocket artillery to reach targets well inside Georgia without having to commit large numbers of troops outside of South Ossetia. It also deployed the equivalent of a motor rifle division, says Felix K. Chang, a former Defense Dept. intelligence officer who is now a senior fellow at the Foreign Policy Research Institute. The force included units from the 58th Army, based nearby. These were reinforced by elements of the 76th Air Assault Div. from the Leningrad Military District and the 96th Airborne Div. and 45th Intelligence Regiment based in Moscow, says Chang. They are elite formations from Russia's strategic reserve that were in more than 100 airlift sorties.

Read the full story at aviationow.com
Posted by Steve Douglass at 5:07 PM No comments:

Everything Cold Is New Again: Russia Amps Up Rhetoric Over Polish Defense Shield. 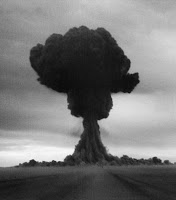 MOSCOW (Reuters) - A top Russian general on Friday said Poland's deal with the United States to set up parts of a missile defence shield on Polish territory lays it open to a possible military strike, a Russian news agency reported.

Poland agreed on Thursday to host elements of a U.S. global anti-missile system after Washington agreed to boost Poland's own military air defences.

"The USA is engaged in an anti-missile defence for its own government, and not for Poland. And Poland, in deploying (elements of the system) opens itself to a military strike. That is 100 percent," Interfax quoted Nogovitsyn as saying.

The Russian government revamped its national security doctrine in 2000, broadening the range of conflicts in which nuclear weapons could be used.

"It is written clearly: We will use it in instances against governments that have nuclear weapons; against allies of countries with nuclear weapons, if they somehow enable them," he said.

Washington says the missile system is aimed at protecting the United States and its allies from long-range missiles that could in the future be fired by Iran or groups such as al Qaeda.

The Kremlin has long said that was untrue, and has opposed the shield as a threat to Russia. The 10 interceptor missiles to be based at a site in northern Poland compare with Russia's own nuclear arsenal of more than 5,000 ballistic warheads.
Posted by Steve Douglass at 6:08 AM No comments: