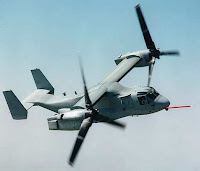 Boeing is preparing to offer the Pentagon another multiyear deal for the V-22 Osprey tilt-rotors used by the U.S. Marine Corps and Air Force, company officials announced.

"We're fully pursuing a second multiyear on the V-22," Boeing's V-22 program manager, Gene Cunningham, said May 4 during a news conference at a Navy League-sponsored conference in Maryland. "We're working with our industry partners to put together the right business case" so the offer could be considered for the 2013 budget.

The deal could include a foreign buyer or other U.S. government agencies, Cunningham said.

He gave no specific quantities of aircraft, but said the deal would likely include the last seven of the Air Force's 50 CV-22s.

The company is determining what impact these additional customers will have on the V-22 production line, which is gearing up to build 40 tilt-rotors per year for the Pentagon by 2014.

Boeing is in its third year of a half-decade multiyear contract for the V-22.

Cunningham also announced that Boeing's V-22 program will respond to the Pentagon's request for information (RfI) for the V-XX Marine One helicopter replacement program.

"We plan to respond to the RfI because it is a vertical program and that seem to have value in terms of the V-22," Cunningham said.

This comes as Boeing is working with the Marines and Air Force to find ways to improve the tilt-rotor's roughly 70 percent reliability rate. The firm is working with suppliers to redesign some parts that are wearing out faster than expected in harsh operating environments, Cunningham said.

HOME
Posted by Steve Douglass at 8:18 PM No comments:

(CNN) -- Full-body scanning machines may reveal a little too much, if an incident of workplace violence this week among Transportation Security Administration screeners is any indication.

A TSA worker at Miami International Airport in Florida was arrested for allegedly assaulting a co-worker who had repeatedly teased him about the size of his genitals.

The insults stemmed from an X-ray of the accused captured during a training exercise with the airport's full-body scanning machines, the report said.
Rolando Negrin "stated he could not take the jokes anymore and lost his mind," allegedly striking the victim with a police baton. According to the report, a witness heard Negrin say in Spanish, "get on your knees or I will kill you and you better apoligise [sic]."

In response to the incident, TSA said it has a zero-tolerance policy for workplace violence. "At the same time, we are investigating to determine whether other officers may have violated procedures in a training session with coworkers and committed professional misconduct," the agency said in a statement.

The incident puts the spotlight back on technology some privacy advocates liken to a virtual strip search.

"As far as I'm concerned, this really demonstrates exactly how detailed the images are, exactly how invasive the search is," said John Verdi, senior counsel with the Electronic Privacy Information Center, a Washington-based research center specializing in civil liberties and privacy issues. It receives much of its funding from private foundations.
Verdi said the Miami incident "... also demonstrates that this technology, and the way it's being implemented by TSA, is ripe for abuse."

The TSA screener scuffle is not the only recent case of workplace tension involving the technology. A security worker at London's Heathrow Airport allegedly made lewd comments about a female colleague who mistakenly entered a scanner, according to the UK's Press Association. The accused worker was given a police warning for harassment.

TSA officials stressed that the incident in Miami was internal and did not involve any member of the traveling public. When the technology is used in airports, one screener views the scan in a remote location and does not come into contact with passengers being screened. The images are permanently deleted and never stored, according to the TSA.

EPIC has filed a lawsuit against the Department of Homeland Security under the Freedom of Information Act seeking details about the government's use of advanced imaging technology.
In April, DHS revealed in a letter to EPIC that it has 2,000 full-body scanning test images, "using TSA models, not members of the public," stored at its test facility. The agency is withholding the images, citing exemptions to the Freedom of Information Act for information pertaining only to internal personnel rules and practices and records that might "benefit those attempting to violate the law."

Verdi finds the idea that the images might be used to evade security "highly problematic."
"Because if merely publishing examples of the images that the TSA has generated during testing would harm security, that really calls into question the effectiveness of the machines," he said.

Examples the TSA says are consistent with what screening officers see in airports are available on the agency's website.

Aviation security expert Douglas Laird said it is "perfectly logical" for the TSA to withhold the 2,000 test images.

"If they were available to the public, then if you were trying to defeat the machine you would study the images to find the weak link, so to speak. I would think they would be crazy to release them," said Laird, who is president of aviation security consulting firm Laird & Associates.

There are shortcomings for any technology, Laird said.

Still, Laird said he believes body-scanning technology would have given officials at Amsterdam's Schipol Airport a much better chance of catching a Nigerian man who boarded a Detroit, Michigan-bound flight on Christmas Day with explosives concealed in his groin area.

The alternative pat-down, which U.S. passengers may opt for instead of body scanning, has to be very intrusive to be effective, and studies show people are less tolerant of physical intrusion than of intrusive technology, Laird said.

While advanced imaging technology doesn't involve direct physical contact, the screener training incident in Miami highlights some travelers' reservations about full-body scans.
"I really think it would give a lot of folks pause if they thought that TSA employees were mocking naked body scans of American air travelers," Verdi said.
Posted by Steve Douglass at 8:07 PM No comments:

Blast From The Past! Click to enlarge:
Posted by Steve Douglass at 7:22 PM No comments: