As the excitement builds in the minutes before the Super Bowl
kick-off, four Air National Guard F-15 Eagle fighter jets will scream over Miami's
Sun Life Stadium in a dramatic show of military support for the big game.

USAF Lt Col John Black, who goes by the callsign "Homer," will lead
the formation, followed by Wing Commander Col Bob "Squirt" Branyon Lt Col
Mike "Speedo" Rouse, the 159FS's commander, will be in position three, with
Col Bill Bair, commander of the 125FW's operations group, holding up the rear.

After the pilots land at nearby Homestead Air Reserve Base, a
Miami-Dade Police helo will whisk them back to the stadium, where they'll be
introduced to the crowd, Bittner said.

The Super Bowl fly-over is a first for the Air National Guard. The wing
has done fly-overs for other National Football League events, most frequently
over Jaguars games near its Jacksonville IAP. But Bittner said there's a
special panache that comes with flying over the big daddy of football games.
"It's a huge honor," he said, calling it a recognition of the wing's
impressive operational readiness posture, and its 24/7 mission of being ready to
scramble at a moment's notice to protect US air space.

The fly-over is just part of the military support being provided as
the New Orleans Saints and Indianapolis Colts do battle during Super Bowl
XLIV. The Armed Forces Color Guard from the Military District of Washington
will kick off that support, marching onto the field before the game to
present the colors, accompanied by two drummers from US Air Force Band.

Meanwhile, as more than 75,000 fans enjoy the sold-out game, military
forces will be at work behind the scenes, supporting civil authorities to
maintain security in and around the stadium and in the skies overhead.

Fighter jets from the Continental US North American Aerospace Defense
Command Region will be airborne, working in coordination with the FBI, US
Customs and Border Protection, FAA and local law enforcement to enforce
flight restrictions over Miami during the game, reported its commander, USAF
Maj Gen Garry Dean.

USAF Col Randy Spears, commander of the 601st Air and Space Ops Ctr,
called the mission an extension of the eagle-eyes his airmen provide every day.
"The men and women of this AOC monitor the skies 24/7, 365 for the
contiguous United States, and Sunday's special event is another part of our mission
set," he said.

In addition, the FL-ANG's 44th Civil Support Team will be on the
ground, poised to support civil authorities, as required. The 40-member team, a
mix of soldiers and airmen, is trained respond to any emergency situation,
including those dealing with weapons of mass destruction, said USAF Lt Col
Ron Tittle, a FL-ANG public affairs officer.

As in recent years, about 40 wounded Marine Corps warriors will be
enjoying the game in person, courtesy of tickets donated by the Cleveland
Browns. Meanwhile, thousands of US service members will be watching, too,
either at home or overseas, via Armed Forces Network broadcasts.
Posted by Steve Douglass at 1:41 PM No comments:

Ladies and gentlemen as you look out the plane you'll notice - uh oops - where's the engine cowling? 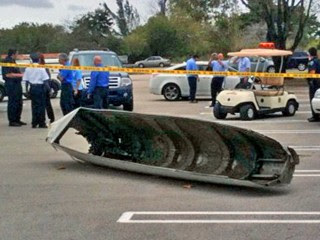 A plane part fell off an Atlas Airlines Boeing 747 and landed in the parking lot of MIami International Airport on Friday, Feb. 5, 2010.

At Super Bowl XLIV Super Bowl XLIV Media Day At Sun Life Stadium Some folks at Miami International Mall may have thought the sky was falling Friday afternoon when a piece of plane fell from the sky and landed in the parking lot.

The part, which is about as big as a car, landed outside of the Dillard's Department store.

The incident involved an Atlas Air Boeing 747 cargo light en route to Miami from Santiago, Chile, and took place at about 11:35 a.m. on Friday, the Federal Aviation Administration reported. The FAA's Kathleen Bergen says the aircraft was on final approach when the part fell. The plane landed safely at MIA.

Atlas Air confirms that the part was a fiberglass fairing from one of its freighter aircraft. The sizeable part did not hit anyone or anything but workers from a nearby auto dealership said they heard it fall and it was very loud.

In a statement released by Atlas, the company said, "Atlas is grateful that no one was injured and is investigating the matter further. Atlas is also cooperating with the appropriate authorities in their review of this matter. Atlas takes this matter very seriously and will be conducting a thorough investigation."
Posted by Steve Douglass at 12:52 PM No comments: