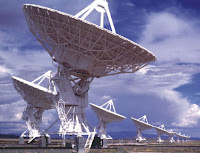 A computer programme which could help identify and even translate messages from aliens in outer space has been developed by a British scientist.

The new programme would compare alien language sounds with those of 60 human languages
But John Elliott of Leeds Metropolitan University believes he has come up with software which at least will decipher the structure of their language - and be the first step in understanding what they are saying.

Dr Elliott's programme would compare an alien language to a database of 60 different languages in the world to search see if it has a similar structure.

He believes that even an alien language far removed from any on Earth is likely to have recognisable patterns that could help reveal how intelligent the life forms are.

"Language has to be structured in a certain way otherwise it will be inefficient and unwieldy," he told New Scientist magazine.

Previous research had shown that it is possible to determine whether a signal carries a language rather than an image or music.

Dr Elliott, from Leeds Metropolitan University, has gone a step further by devising a way to pick out what might be words and sentences.

According to Dr Elliott, such terms in any language, are separated by up to nine words or characters.

This limit on phrase length seems to correspond to the level of human cognition - how much information we are able to process at once.

In an alien language, analysing these phrases might make it possible to gauge how clever the authors of the message are.

If they are much smarter than us, there would a lot of words packed into the phrases.

The programme should also be able to break a language up into crucial words such as nouns and verbs, even though their meaning is unknown.

It can, for instance, locate adjectives from the fact that they are almost always next to nouns.

Because languages have different word orders, Dr Elliott is amassing a library of the syntaxes of 60 human tongues.

If a message is received from outer space, it could be compared against this database. Scientists would then be able to see if it resembled anything human, or a mix of Earthly languages.

Dr Elliott admits that in order to translate what the aliens are actually saying it may still be necessary to have a "code book" of some sort.

But US linguist Dr Sheri Wells-Jensen, from Bowling Green State University in Ohio, points out that "you have to start somewhere".

She added: "My money is on being able to understand aliens."

Editor's note: The success of this program is rather limited by the assumption that an intelligent extraterrestrial species would communicate something remotely similar to human speech sounds. Even on our own planet, many species communicate beyond the range of human vocalizations such as whales or bats. Other, like ants communicate through chemical secretions. Designing a program to take in the infinite variables in ways intelligent creatures might communicate seems like an impossible if not daunting task. My bet is on a common language based on mathematics.

By Paul Schemm - The Associated Press
Posted : Sunday Oct 19, 2008 10:43:32 EDT
CAIRO, Egypt — The main Web sites that normally carry messages from the al-Qaida terror group remain inoperable more than a month after they went down just ahead of the seventh anniversary of the Sept. 11 attacks.

The Associated Press first reported in September that the Web forums that typically carry messages and videos from Al-Qaida and its allied groupings had ceased functioning around Sept. 10, just as the group said it was set to release a new video message.

Only a site called Hesbah and a new one named Faloja function fitfully at this point, more than a month later, and carry messages from Al-Qaida and its allies in Iraq, Somalia, Pakistan and the Palestinian territories about recent operations.

Al-Fajr Media Center, the extremist group’s communications wing, issued a terse statement on Sept. 29 blaming the problems on “technical reasons” but denying that the sites had come under some kind of cyber-attack, as has been widely speculated in the media.

“We deny reports published by the media of the tyrants regarding the fall of some of the headquarters of these networks into the hands of the enemy,” the statement said, according to the U.S-based SITE Intelligence Group, which monitors extremist sites.

Contributors to the forums also have worried publicly that some kind of Western cyber-attack targeted the sites.

One prominent jihadi poster, quoted by SITE, suggested that extremists should strike back by infiltrating other, more-moderate Islamic discussion forums and flooding them with extremists rhetoric to turn them into al-Qaida discussion groups.

In the past week, a new Web site called “the Electronic jihad” also has resurfaced to counter renewed attacks on Islam online, according to its founders.

It is not clear, however, if the site has any connection with Al-Qaida.

Since the Sept. 11, 2001 attacks on the United States, al-Qaida has run sites on the Web that it has used to disseminate its messages. Many have been shut down over the years as new ones emerge.

The group over the years also has appeared to increasingly turn toward online forums, apparently so that it no longer had to rely on news stations to air video and audio messages.

Terror analysts have long seen al-Qaida’s media arm as a powerful tool for rallying the network’s followers and sympathizers, churning out videos and audiotapes even though the top leadership is mostly out of touch, hiding in the mountainous border regions of Pakistan and Afghanistan.

The videos have grown in technical sophistication, featuring computer animations and clips from international television media.

Al-Qaida leader Osama bin Laden has issued three audiotapes himself this year, the most recent in May.

The Arabic-language sites also have an extensive online following of would-be jihadis who discuss various topics, including the best ways to carry out attacks and which techniques are religiously permissible.

Editors note: A denial of service attack on al Queda websites by the U.S. government would effectively quiet a good source of intelligence information. Therefore, I think one can rule out U.S. involvement.
Posted by Steve Douglass at 1:48 PM No comments: