China Science & Technology Daily announces radio telescope may have intercepted radio signals from extraterrestrials - then walks it back. 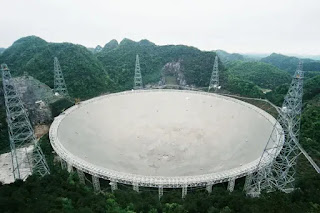 NEWSWEEK/GLOBAL SOURCES : Scientists in China say they have detected what could be the trace of a signal from an alien civilization.

The researchers have identified what they have called "suspicious" signals from space as part of a search for evidence of aliens, and work is ongoing to determine that they might be.

The signals were detected by China's FAST radio telescope, also referred to as the "Sky Eye" telescope. With a dish diameter of 1,600 ft, it is the largest of its kind in the world, and since 2020 the telescope has been involved in researching alien life.
On Tuesday, the Chinese state media outlet Science and Technology Daily reported that researchers under professor Zhang Tongjie, described as chief scientist of the China Extraterrestrial Civilization Research Group at Beijing Normal University, had found a number of "possible technological traces" from intelligent civilizations elsewhere in the cosmos.
Science and Technology Daily reports that Tongjie and his team identified two groups of what were referred to as "suspicious" signals back in 2020 and that a further signal was identified this year.

The signals are certainly not proof of alien life just yet. Tongjie told the media outlet: "The possibility that the suspicious signal is some kind of radio interference is also very high, and it needs to be further confirmed and ruled out. This may be a long process."

He added that the team would use the telescope to repeat observations of the so-called suspicious signals to see if any further information can be obtained.

Unidentified radio signals from space are nothing new and often provoke speculation about a potential intelligence source. Often, though, such signals can be explained as probably having a natural source such as a highly energetic star.

Perhaps the most famous mysterious space signal ever detected was the Wow! signal, detected by the Big Ear telescope at Ohio State University in 1977.
The apparent lack of aliens has given rise to what's known as the Fermi paradox, which describes the contradiction between mathematical predictions that alien life should exist in our galaxy and the fact that we've not seen any.
Some researchers, for instance, have suggested that there should be tens of thousands of alien civilizations in our galaxy.

Some potential solutions to the Fermi paradox include that we're overestimating how common intelligence life might be; that intelligent life has decided not to transmit information; or that we're simply not seeing or understanding such information.

The report, however, has now been deleted. The reason for the same is not yet clear. This happened after the news had already started trending on social network Weibo and was picked up by other media outlets, including state-run. When the link is clicked, the viewer sees this page:

Why China has deleted this report after publishing the report, its information is not yet available.

Posted by Steve Douglass at 8:11 AM No comments: