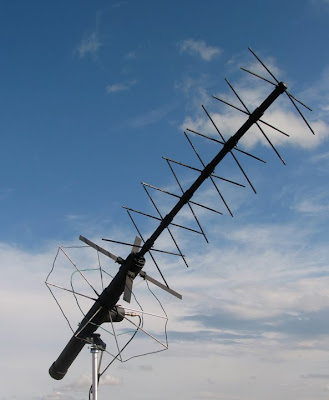 By now you might be wondering when I’m going to finally write about the nuts & bolts of building my DIY UHF SATCOM antenna.

I mean – isn’t that why you tuned in?

To recap, I wrote (and you patiently read) about my motivation and my rant about the high cost of new and surplus antennas, not to mention a little about the cool Uniden receiver(s) (Uniden BCD-998T/BCD-396XT) I intend to use(said) antenna with.

So without further delay –

I once reasoned that if I ever came across one of the Dorne & Margolin antennas again – if I could just take some photos and (maybe) some measurements I might be able to reverse-engineer one and possibly build my own version.

Heck, I had (on many occasions) built home-brew UHF Yagi beams and in fact sold quite a few in the past, offering them for sale on my now (long defunct) Intercepts Newsletter – with many of them still in use today.

All it would take (I figured) was some educated-best guess-photogrammetric analysis (with something in the image to indicate scale) and I could probably Yankee-engineer a decent-working-prototype with the final goal selling (either antennas or the plans to build their own) to like-minded UHF MILCOM aficionados like myself.

As fate would have it, at an open house (air show) at Cannon Air Force Base I finally (after quite a few years wait) was able to inspect (up close) and take a few photos of another D&M antenna.

It was part of a military PR –display – connected to a DAMA portable (man-pack) UHF SATCOM transceiver. I again pumped the airman (in charge of the display) for information about the system and took a few close-up photos. I couldn’t help but notice his raised eyebrows at my more-than-passing curiosity and intense interest in his radio rig he but didn’t say anything.

I try to reassure him by saying I was a communications-technology-enthusiast, which (from his reply) he took to mean ham-radio-operator. He tells me (in civilian life) he is a ham.

My reply apparently put him at ease as he proceeded to fill me in on more technical details about the DAMA system, even going so far as to show me how to find the elevation and azimuth of the military satellite his rig was communicating through.

Later (as I examined my photos) I came to the (false) realization that the antenna must be a simple X-beam design. I guessed (incorrectly) they weren’t much more complicated than the Yagi’s I had constructed.

The driven elements looked much like two folded dipoles, attached to a short boom (six feet) situated behind a series of x-shaped directors with a wire-mesh reflector at the back. How hard could that be to replicate?


Using the photos as my guide, I experimented and over the years I built many antennas. Although they all worked (as good UHF MILAIR antennas) I was never able to monitor the UHF satellites with any real success. The most I could ever manage were choppy or weak, static filled brief intercepts. My assumption was I just didn’t have the element measurements figured out right.

Then one day while doing some research on the Internet I stumbled across this: http://www.marlboroughcomms.com/MCL/Product.aspx?proId=65

Marlborough Communications Limited is a British Company that builds military-communication gear under various government contracts, for both her Majesty’s special armed services as well for us Yanks.

Like other companies of this type, seeking lucrative government bid-approval, specifications of all their products are (SOP) posted online in downloadable Adobe Acrobat .pdf form.

However, standing out clearly among the usual obtuse list of equipment specifications, frequency ranges and MilSpec nomenclature was something I had never seen - a simplified three-view drawing of their manpack foldable UHF SATCOM antenna known as the AV2040-2 – complete with metric dimensions. 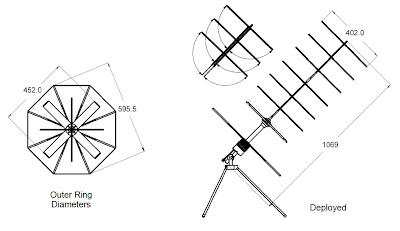 Dimensions! Was this the missing data I needed? I quickly downloaded the .pdf and printed it out.

I then took it to my computer guru, Wilhelm Scream (not his real name) since he is to math what Lance Armstrong is to cycling.

He took a long look at the three-view and the dimensions posted, produced a set of digital calipers and placed them on the drawing.

After a few minutes of caliper(ing) calculating and re-calculating, Scream said, “This drawing is to scale. Within a small degree of error – we could upscale it and use them as blueprints to build your antenna. “

Over the next few minutes, Scream produced the measurements that had eluded me for so long. A slow grin spread across my face when I realized that it was very possible to build a working UHF SATCOM antenna, an esoteric passion to be sure, but one that had been floating around in the back of my consciousness for a very long time.

After several brain- sessions with Scream, we drafted up a laundry list of parts we would need, which included: several sections of various-sized PVC piping, aluminum rods of various length, copper wire, RF connectors, RG-6 coax feed-line and flat aluminum bar-stock for construction of the driven elements.

Most of the tools we would need to cut, drill and shape our parts, Scream already had – which included electric saws, a Dremel and a drill press.

Armed with our list we went to the only place that had everything an Interceptor could need to build a UHF SATCOM antenna system – Home Depot. 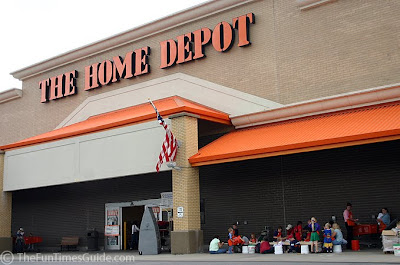 It took several trips – but soon we had everything we needed – and incredibly I paid something in the neighborhood of $20.00.

To be continued in PART 4. 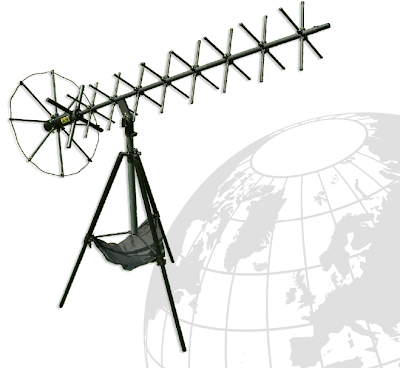 CNN) -- More information about an alleged Russian spy ring that was operating in the United States is expected to be revealed Wednesday at court hearings in Virginia and Massachusetts, court officials said.

Zottoli and Mills have already admitted that they are Russian citizens and have been living as a couple under false identities in Virginia. Prosecutors said that they made the admissions soon after being arrested and authorities have found evidence to support that information.
The other suspect, Semenko, is accused of aiding the plot by allegedly conducting private wireless computer links to communicate with a Russian government official, court documents said.

In all, 11 suspects were arrested in the alleged spy plot in late June.
Meanwhile, a human rights activist has raised the possibility that a Russian researcher convicted of spying for U.S. intelligence services could be exchanged for one of the spy suspects in the United States.

Ernst Chyorny, a member of the Public Committee in Defense of Scientists in Russia, told CNN on Wednesday that the mother of Igor Sutyagin, the convicted Russian spy, told him about the development.

Earlier on Wednesday, Russian news agencies also reported that Sutyagin may be swapped along with other individuals in exchange for the people suspected of spying for Russia and detained in the United States.
Posted by Steve Douglass at 7:12 AM No comments: