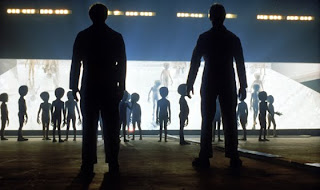 The United Nations was set today to appoint an obscure Malaysian astrophysicist to act as Earth’s first contact for any aliens that may come visiting.
Mazlan Othman, the head of the UN's little-known Office for Outer Space Affairs (Unoosa), is to describe her potential new role next week at a scientific conference at the Royal Society’s Kavli conference centre in Buckinghamshire.

She is scheduled to tell delegates that the recent discovery of hundreds of planets around other stars has made the detection of extraterrestrial life more likely than ever before - and that means the UN must be ready to coordinate humanity’s response to any “first contact”.

During a talk Othman gave recently to fellow scientists, she said: “The continued search for extraterrestrial communication, by several entities, sustains the hope that some day humankind will receive signals from extraterrestrials.


"When we do, we should have in place a coordinated response that takes into account all the sensitivities related to the subject. The UN is a ready-made mechanism for such coordination.”
Professor Richard Crowther, an expert in space law and governance at the UK Space Agency and who leads British delegations to the UN on such matters, said: “Othman is absolutely the nearest thing we have to a ‘take me to your leader’ person.”
However, he thinks humanity’s first encounter with any intelligent aliens is more likely to be via radio or light signals from a distant planet than by beings arriving on Earth. And, he suggests, even if we do encounter aliens in the flesh, they are more likely to be microbes than anything intelligent.
Posted by Steve Douglass at 8:28 PM No comments:

Washington (CNN) -- The Department of Defense recently purchased and destroyed thousands of copies of an Army Reserve officer's memoir in an effort to safeguard state secrets, a spokeswoman said Saturday.

"DoD decided to purchase copies of the first printing because they contained information which could cause damage to national security," Pentagon spokeswoman Lt. Col. April Cunningham said.
In a statement to CNN, Cunningham said defense officials observed the September 20 destruction of about 9,500 copies of Army Reserve Lt. Col. Anthony Shaffer's new memoir "Operation Dark Heart."
Shaffer says he was notified Friday about the Pentagon's purchase.

"The whole premise smacks of retaliation," Shaffer told CNN on Saturday. "Someone buying 10,000 books to suppress a story in this digital age is ludicrous."
Shaffer's publisher, St. Martin's Press, released a second printing of the book that it said had incorporated some changes the government had sought "while redacting other text he (Shaffer) was told was classified."

From single words and names to entire paragraphs, blacked out lines appear throughout the book's 299 pages.

CNN obtained a memo from the Defense Intelligence Agency dated August 6 in which Lt. Gen. Ronald Burgess claims the DIA tried for nearly two months to get a copy of the manuscript. Burgess said the DIA's investigation "identified significant classified information, the release of which I have determined could reasonably be expected to cause serious damage to national security."
Burgess said the manuscript contained secret activities of the U.S. Special Operations Command, CIA and National Security Agency.

Shaffer's lawyer, Mark Zaid, said earlier this month that the book was reviewed by Shaffer's military superiors prior to publication.

"There was a green light from the Army Reserve Command," Zaid told CNN.
But intelligence agencies apparently raised objections when they received copies of the book.

The Pentagon contacted St. Martin's Press in early August to convey its concerns over the release of the book. According to the publisher, at that time the first printings were just about to be shipped from its warehouse. Shaffer said he and the publisher worked hard "to make sure nothing in the book would be detrimental to national security."

One of the book's first lines reads, "Here I was in Afghanistan (redaction) My job: to run the Defense Intelligence Agency's operations out of (redaction) the hub for U.S. operations in country."
In chapter 15, titled "Tipping Point," 21 lines within the first two pages are blacked out.
In the memoir, Shaffer recalls his time in Afghanistan leading a black-ops team during the Bush administration.

The Bronze Star medal recipient told CNN he believes the Bush administraton's biggest mistake during that time was misunderstanding the culture there.

Defense officials said they are in the process of reimbursing the publisher for the cost of the first printing and have not purchased copies of the redacted version.

At least one seller on the online auction site eBay claiming to have a first-edition printing is selling it for an asking price of nearly $2,000. The listed retail price for the second printing is $25.99.
Posted by Steve Douglass at 5:45 PM No comments: 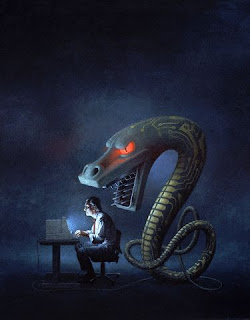 San Francisco, California and London, England (FT.com) -- A piece of highly sophisticated malicious software that has infected an unknown number of power plants, pipelines and factories over the past year is the first program designed to cause serious damage in the physical world, security experts are warning.

The Stuxnet computer worm spreads through previously unknown holes in Microsoft's Windows operating system and then looks for a type of software made by Siemens and used to control industrial components, including valves and brakes.

Stuxnet can hide itself, wait for certain conditions and give new orders to the components that reverse what they would normally do, the experts said. The commands are so specific that they appear aimed at an industrial sector, but officials do not know which one or what the affected equipment would do.

While cyber attacks on computer networks have slowed or stopped communication in countries such as Estonia and Georgia, Stuxnet is the first aimed at physical destruction and it heralds a new era in cyberwar.

At a closed-door conference this week in Maryland, Ralph Langner, a German industrial controls safety expert, said Stuxnet might be targeting not a sector but perhaps only one plant, and he speculated that it could be a controversial nuclear facility in Iran.

According to Symantec, which has been investigating the virus and plans to publish details of the rogue commands on Wednesday, Iran has had far more infections than any other country.
"It is not speculation that this is the first directed cyber weapon", or one aimed at a specific real-world process, said Joe Weiss, a US expert who has testified to Congress on technological security threats to the electric grid and other physical operations. "The only speculation is what it is being used against, and by whom."

Experts say Stuxnet's knowledge of Microsoft's Windows operating system, the Siemens program and the associated hardware of the target industry make it the work of a well-financed, highly organised team.

They suggest that it is most likely associated with a national government and that terrorism, ideological motivation or even extortion cannot be ruled out.
Stuxnet began spreading more than a year ago but research has been slow because of the complexity of the software and the difficulty in getting the right industry officials talking to the right security experts.

Microsoft has patched the vulnerabilities in Windows but experts remain concerned because of the worm's ability to hide once it is in a system.

Experts have only begun publishing more of their analyses in the last few weeks, hoping that such steps will get more answers from private companies and government leaders.
Siemens said that since July 15, when it first learnt about Stuxnet, 15 of its customers had reported being infected by the worm.

The company would not name the customers but said that five were in Germany and the rest were spread around the world. Siemens said critical infrastructure had not been affected by the virus and in each case the worm had been removed.

The German conglomerate said it had offered its customers a fix for the virus and that since the Stuxnet virus was detected, there had been 12,000 downloads of its anti-virus software.
Posted by Steve Douglass at 6:39 AM No comments:

CNN) -- Authorities arrested a passenger after a plane made an emergency landing in Sweden on Saturday morning, police said.

The plane -- which had 273 people onboard and was flying from Canada to Pakistan -- landed after a caller told authorities that a passenger had explosives with him.
All passengers were later evacuated from the plane, Stockholm Police spokesman Kjell Lindgren said.

The man in custody is suspected of "preparation of aviation sabotage," Lindgren said, adding that no explosives had been found yet.

"Right now we are still searching through the plane and the baggage, but we have found no expolsives on the man," he said.

He said police still are determining what exactly was said during the call that forced the plane to land. "Our priority is to find out what happened on that plane," Lindgren said.
The man was arrested in a "very nondramatic fashion" as passengers filed off the plane, he added. While the man was carrying a passport, police are still investigating his identity.

Pakistan International Airlines Flight 782 was heading from Toronto, Canada, to Karachi, Pakistan, when it landed because of "security reasons," said Sultan Hassan, an airline spokesman.
The plane landed at Arlanda airport in Stockholm, Sweden, at 7:30 a.m. (1:30 a.m. ET) Saturday after a woman calling from a pay phone in Canada tipped off police that a man on the plane had explosives, police spokesman Janne Hedlund said.

There was no direct bomb threat against the flight, he said.
Hassan said he did not have more specific details about the cause of the diversion. All passengers on board are safe, he said.
Posted by Steve Douglass at 6:29 AM No comments: