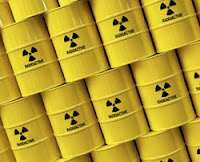 Tripoli, Libya (CNN) -- A military site containing what appears to be radioactive material has been uncovered by revolutionary forces near the southern Libyan city of Sabha.

The site, not far from Sabha in the Sahara desert, has two warehouses containing thousands of blue barrels marked with tape saying "radioactive," and plastic bags of yellow powder sealed with the same tape.

The material has not been confirmed as being radioactive, but in 2004 the International Atomic Energy Agency (IAEA) confirmed that the Libyan government had yellowcake stored in Sabha.

Yellowcake is processed uranium ore that can be used to produce enriched uranium for nuclear purposes.

Fighters entered Sabha, long regarded as a pro-Gadhafi stronghold, on Wednesday afternoon and initially met no resistance, officials said.
About a dozen lightly armed revolutionary fighters are now guarding the military site outside the city.