Posted by Steve Douglass at 11:42 AM No comments: 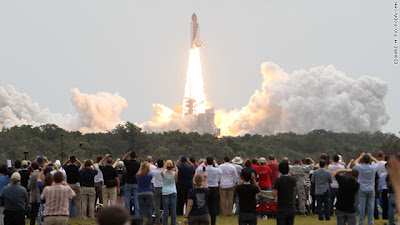 Atlantis' journey to the International Space Station is NASA's 135th and final mission in the space shuttle program, which began 30 years ago.

The four-member crew blasted off on a 12-day mission just before 11:30 a.m. The four -- all shuttle veterans -- are on their way to deliver supplies to the International Space Station.

The possibility of storms had raised doubt about whether the launch would take place as planned, but NASA gave the shuttle a "go" for launch a few minutes before liftoff.
Thousands of people, including some who came to Kennedy Space Center three decades ago for the first launch, were gathered to watch. Almost a million people were expected to be on hand to witness the historic event.

One onlooker flew in with a friend Thursday from New York. Unable to find a hotel, the men went to a Walmart and picked up a tent, air mattresses and some tortilla chips and camped out on a nearby spit of land to wait for the launch. Seeing the shuttle blast off, they said, will let them check an item off their things-to-do-before-you-die bucket list.

Posted by Steve Douglass at 8:58 AM No comments: 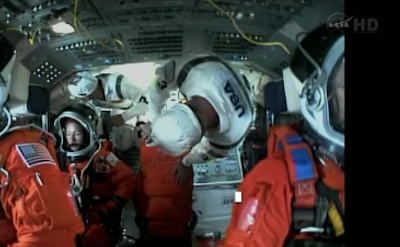 LINK: HERE
Posted by Steve Douglass at 5:45 AM No comments: