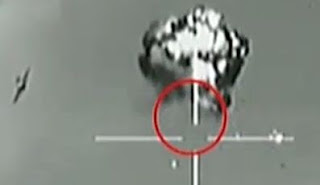 JERUSALEM — Israel scrambled fighter jets to intercept a drone Saturday that crossed deep into Israeli airspace from the Mediterranean Sea, shooting the aircraft down over the country's southern desert, the military said.
The incident marked the first time in at least six years that a hostile aircraft has penetrated Israel's airspace, and Israeli officials said they were taking the incident seriously, raising the possibility of retaliatory action.
It was not immediately clear who launched the drone, but suspicion quickly fell on the Lebanese Islamic militant group Hezbollah. The Iranian-backed group is known to have sent drones into Israeli airspace on several previous occasions.
Tensions are running high between Iran and Israel over Tehran's nuclear program, which the West believes is cover for the development of atomic weapons. The Islamic Republic denies the allegations, and says its program is for peaceful purposes only. Israel has threatened to carry out a military strike against Iran's nuclear facilities to prevent Iran from acquiring such weapons.
Lt. Col. Avital Leibovich said Israeli ground systems detected the drone, which flew over the Gaza Strip but did not originate there, Saturday morning. They alerted the air force, which scrambled the jets to intercept the aircraft. She said Israel was still trying to determine where the drone took off from. Nobody was hurt in the incident.
Leibovich said Israeli jets escorted the drone before deciding to bring it down in the northern Negev area, which is largely uninhabited.
The drone, which was downed near the Yatir Forrest close to the West Bank, had spent about 20 minutes in Israeli air space, an Israeli military official said on condition of anonymity in line with protocol.
Leibovich did not give more details, but Israel media reported that the aircraft was not carrying explosives and could have been a surveillance drone.
Defense Minister Ehud Barak said in a statement that Israel views "this incident of attempting to enter Israeli airspace very severely and we will consider our response later," while Prime Minister Benjamin Netanyahu vowed that Israel "will continue to defend our borders in the sea, on the land and in the air for the security of the citizens of Israel."
It's not the first time that Israel has shot down a drone in its airspace, although such cases are very rare.
Hezbollah sent a few aircraft over Israel over the past decade but without much success. In the 2006 war, the militant group launched an Iranian-made drone capable of carrying explosives into Israel that was shot down. Another drone two years earlier crashed in the Mediterranean.
Last week Israeli authorities indicted an Arab citizen of Israel on charges of spying for Hezbollah, accusing him of gathering intelligence on security for Israel's president and other public officials as well as military installations.

Posted by Steve Douglass at 3:20 PM No comments: