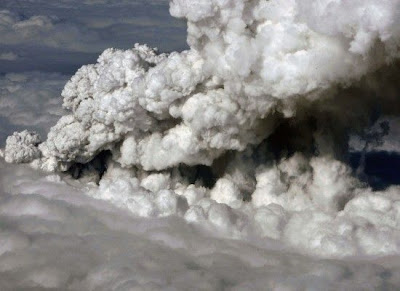 London, England (CNN) -- A cloud of ash from an Icelandic volcano stymied European air traffic and choked international travel on Saturday as airlines cut flights, left stranded passengers, and watched their daily revenue nosedive.
Thousands of flights have been canceled. European air traffic officials said 5,000 flights took place instead of the customary number of 22,000 on Saturday. About 10,400 flights took place in Europe on Friday, compared with the normal 28,000.

President Obama canceled his trip to Poland to attend the funeral of Polish President Lech Kaczynski because of the snarled air traffic, the White House said Saturday.

There were restrictions on civil flights in 23 countries across most of northern and central Europe. This swath comprises Austria, Belgium, Croatia, the Czech Republic, Denmark, Estonia, Finland, most of France, most of Germany, Hungary, Ireland, northern Italy, the Netherlands, Norway, Poland, Romania, Serbia, Slovenia, Slovakia, Sweden, Switzerland, Ukraine and the United Kingdom.

The eruption began March 20 beneath the Eyjafjallajokull glacier in southern Iceland, blowing a hole in the ice. It worsened this week, forcing local evacuations and eventually affecting European airspace. Although barely visible in the air, the ash -- made up of tiny particles of rock, glass and sand -- poses a serious threat to aircraft.
Posted by Steve Douglass at 7:57 PM No comments: