Stephen Colbert awaits NASA decision: "NASA has clamped a tight lid on its choice of a name for the international space station's new wing, but it's sending an astronaut to break the news to comedian Stephen Colbert on Tuesday night.

Posted by Steve Douglass at 2:20 PM No comments:

Pentagon looks to move pirate battle to shore: "As the Defense Department weighs options to prevent a repeat of the drama that unfolded on the seas this weekend, those who patrol the waters say pirates must be rooted out before they leave land.

Posted by Steve Douglass at 2:20 PM No comments:

Posted by Steve Douglass at 2:18 PM No comments: 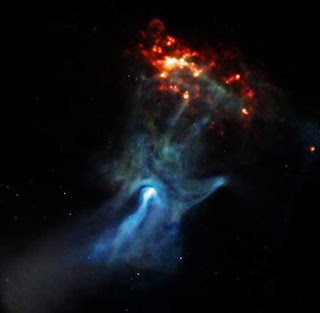 It shows what appear to be ghostly blue fingers -- thumb and pinky clearly discernible from index, ring and middle digits -- reaching into a sparkling cloud of fiery red.

NASA says the display is caused by a young and powerful pulsar, known by the rather prosaic name of PSR B1509-58.

"The pulsar is a rapidly spinning neutron star which is spewing energy out into the space around it to create complex and intriguing structures, including one that resembles a large cosmic hand," NASA says.

The space agency says B1509 -- created by a collapsed star -- is one of the most powerful electromagnetic generators in the Galaxy. The nebula is formed by a torrent of electrons and ions emitted by the 1,700-year-old phenomenon.

The finger-like structures are apparently caused by "energizing knots of material in a neighboring gas cloud," NASA says.
Posted by Steve Douglass at 12:17 PM No comments: