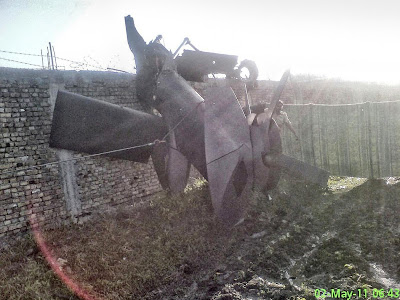 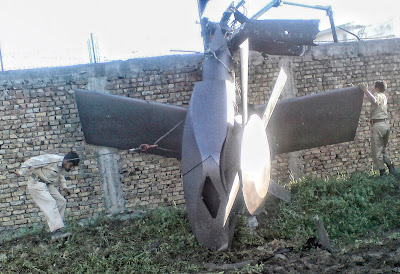 I thought I'd do a little enhancement work on a large image of the secret stealth helicopter used in the Osama bin Laden raid. Applying a few filters I was really able to pull out the details. Note how much bigger it looks than a regular Blackhawk tail as in this photo HERE
and HERE.

PHOTO OF H60 tail with human for scale.

Red Squadron was picked for the mission because it was ready at DevGru’s Dam Neck, Va., headquarters and available for tasking. “It was Red Squadron,” the recently retired SEAL officer said. “They were not on alert and they weren’t deployed.”

Like the other line squadrons, Red Squadron has about 50 operators, “of which they picked about half of them for this thing,” he added.
Posted by Steve Douglass at 5:05 PM No comments:

What has Osama bin watching?

Many people have been curious to what the dead terrorist osama bin Laden has been watching on his TV.

Click on this LINK to find out and then change the channel by adding your own YouTube video link.
Posted by Steve Douglass at 3:11 PM No comments: 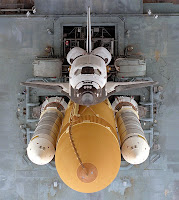 During the 16-day mission, Endeavour and its crew will deliver the Alpha Magnetic Spectrometer (AMS) and spare parts including two S-band communications antennas, a high-pressure gas tank and additional spare parts for Dextre
Posted by Steve Douglass at 1:39 PM No comments:

ISLAMABAD, Pakistan — For the second time in five months, the Pakistani authorities have angered the Central Intelligence Agency by leaking the name of the C.I.A. station chief in Islamabad to Pakistani news media, a deliberate effort to complicate the work of the American spy agency in the aftermath of the raid that killed Osama Bin Laden, American officials said.


"After our raid, some defiance was to be expected regarding our not informing them. But the lengths to which the Prime Minister went to avoid taking any blame but rather shifting it all to the US, is unbelievable."

The publication of the name demonstrated the tilt toward a near adversarial relationship between the C.I.A. and the Pakistani spy agency, the Inter Services Intelligence Directorate, or ISI, since the Bin Laden raid. It appeared to be intended to show the leverage the Pakistanis retain over American interests in the country, both sides said.

In an address before Parliament on Monday, Prime Minister Yousaf Gilani made clear that Pakistani officials at the highest levels accepted little responsibility for the fact that Bin Laden was able to hide in their country for years.

Instead, he obliquely criticized the United States as having driven Bin Laden into Pakistan, condemned its violation of Pakistan’s sovereignty and called the Qaeda leader’s presence in Pakistan an intelligence failure of the “whole world.”

He said it was “disingenuous” for anyone to imply that the ISI or the army was “in cahoots” with Bin Laden, something American officials suspect but say they have no proof of.

The prime minister’s statements, along with the publication of the name of the C.I.A. station chief, signaled the depths of the recriminations and potential for retaliation on both sides as American officials demand greater transparency and cooperation from Pakistan, which has not been forthcoming.

The Pakistani spy agency gave the name of the station chief to The Nation, a conservative daily newspaper, American and Pakistani officials said.

The name appeared spelled incorrectly but in a close approximation to a phonetic spelling in Saturday’s editions of The Nation, a paper with a small circulation that is supportive of the ISI. The ISI commonly plants stories in the Pakistani media and is known to keep some journalists on its payroll.

Last December, American officials said the cover of the station chief at the time was deliberately revealed by the ISI. As a result, he was forced to leave the country.

In that case, the name of the station chief appeared in at least one Pakistani newspaper, including The News, a widely circulated English language paper. Subsequently, a Pakistani lawyer representing a family of victims of an American drone strike against militants in the tribal region included the name in a legal complaint sent to the Pakistani police.

Described as one of the agency’s toughest and most experienced officers, the current station chief supervised aspects of the successful raid against Bin Laden, including the C.I.A. safe house used to spy on the compound where Bin Laden lived for five years.

The safe house was located close enough to the compound at Abbottabad for C.I.A. agents to gather details of the daily life of the Qaeda leader that helped the planning for the operation, Obama administration officials said.

The relationship between the new station chief and the head of the ISI, Lt. Gen. Ahmed Shuja Pasha, has been described as particularly acrimonious by officials familiar with their meetings.

The two men first clashed over the case of Raymond A. Davis, a C.I.A. contractor who killed two Pakistanis in January during an attempted robbery. He was detained by Pakistan for more than a month, despite arguments from the Obama administration that he was protected by diplomatic immunity.

The killing of Bin Laden, and suggestions by the Obama administration that officials in the ISI may have known his whereabouts and provided him support, have infuriated General Pasha, Pakistani officials said.

General Pasha, and the chief of the Pakistani Army, Gen. Ashfaq Parvez Kayani, were humiliated that the United States had deliberately not warned Pakistan of the raid, they said.

READ MORE AT THE NYTIMES
Posted by Steve Douglass at 12:10 PM No comments: