The National Security Agency is harvesting hundreds of millions of contact lists from personal e-mail and instant messaging accounts around the world, many of them belonging to Americans, according to senior intelligence officials and top-secret documents provided by former NSA contractor Edward Snowden.

The collection program, which has not been disclosed before, intercepts e-mail address books and “buddy lists” from instant messaging services as they move across global data links. Online services often transmit those contacts when a user logs on, composes a message, or synchronizes a computer or mobile device with information stored on remote servers.

Rather than targeting individual users, the NSA is gathering contact lists in large numbers that amount to a sizable fraction of the world’s e-mail and instant messaging accounts. Analysis of that data enables the agency to search for hidden connections and to map relationships within a much smaller universe of foreign intelligence targets.

During a single day last year, the NSA’s Special Source Operations branch collected 444,743 e-mail address books from Yahoo, 105,068 from Hotmail, 82,857 from Facebook, 33,697 from Gmail and 22,881 from unspecified other providers, according to an internal NSA PowerPoint presentation.

Those figures, described as a typical daily intake in the document, correspond to a rate of more than 250 million a year.

Each day, the presentation said, the NSA collects contacts from an estimated 500,000 buddy lists on live-chat services as well as from the inbox displays of Web-based e-mail accounts.

The collection depends on secret arrangements with foreign telecommunications companies or allied intelligence services in control of facilities that direct traffic along the Internet’s main data routes.

Although the collection takes place overseas, two senior U.S. intelligence officials acknowledged that it sweeps in the contacts of many Americans. They declined to offer an estimate but did not dispute that the number is likely to be in the millions or tens of millions.

A spokesman for the Office of the Director of National Intelligence, which oversees the NSA, said the agency “is focused on discovering and developing intelligence about valid foreign intelligence targets like terrorists, human traffickers and drug smugglers. We are not interested in personal information about ordinary Americans.”

The spokesman, Shawn Turner, added that rules approved by the attorney general require the NSA to “minimize the acquisition, use and dissemination” of information that identifies a U.S. citizen or permanent resident.

The NSA’s collection of nearly all U.S. call records, under a separate program, has generated significant controversy since it was revealed in June. The NSA’s director, Gen. Keith B. Alexander, has defended “bulk” collection as an essential counterterrorism and foreign intelligence tool, saying, “You need the haystack to find the needle.”

Contact lists stored online provide the NSA with far richer sources of data than call records alone. Address books commonly include not only names and e-mail addresses, but also telephone numbers, street addresses, and business and family information. Inbox listings of e-mail accounts stored in the “cloud” sometimes contain content, such as the first few lines of a message.

READ THE REST OF THE STORY AT THE WASHINGTON POST
Posted by Steve Douglass at 8:23 PM No comments: 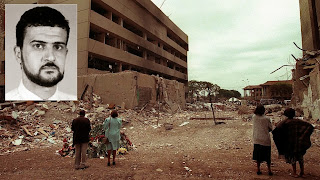 A Libyan terrorist suspect who was held aboard a U.S. warship is now in the United States, CBS News has confirmed.
The al Qaeda suspect, known as Abu Anas al-Libi, has been under federal indictment in New York for more than a decade. He's expected to stand trial over whether he helped plan and conduct surveillance for the bombings of U.S. embassies in Africa in 1998.
U.S. special operations forces snatched Al-Libi during a raid in Libya on Oct. 5.

His full name is Nazih Abdul-Hamed al-Ruqai and he used to be on the FBI's most wanted terrorists list. His family says he was not in al Qaeda.
Last week, Islamic militants in Libya vowed to avenge the arrest of Al-Libi by U.S. Special Forces.
In a statement posted to several online portals frequently used by jihadi groups operating in eastern Libya -- including Ansar al-Sharia, which is believed to have been involved in the Sept. 11, 2012 attack on the U.S. diplomatic posts in Benghazi which left Ambassador Chris Stephens and three other Americans dead -- the militants vowed to "strike back" at those responsible for the kidnapping.
While acknowledging that U.S. troops carried out the raid to apprehend al-Libi, the statement suggested reprisals would target the Libyan government, or, "those who betrayed their country and got implicated in this conspiracy."