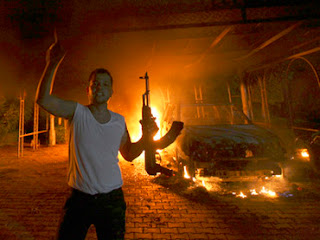 The State Department’s chief of security and two other officials have resigned from their positions, the Associated Press and CNN are reporting, following an independent investigation of the fatal attack on a U.S. diplomatic post in Libya that found that “grossly” inadequate security and reliance on local militias left U.S. personnel vulnerable.

For several years after he initially retired from government in 1998, he worked as an administrator for the Pan American Health Organization. In 2005, Boswell began a three-year stint as assistant deputy director for security in the Office of the Director of National Intelligence, responsible for development of security policies throughout the intelligence community.

Lamb, Boswell’s deputy in charge of international programs, drew the lion’s share of criticism from lawmakers during hearings on Benghazi security held in October. It was Lamb, according to testimony, who denied requests from the U.S. Embassy inTripoli for an extension of temporary security forces that were withdrawn in the months prior to the Benghazi attack.

The review of the assault on the mission in Benghazi, Libya, that killed Ambassador J. Christopher Stevens and three other Americans faulted systemic failures of leadership and management deficiencies at senior levels within two bureaus of the State Department, according to an unclassified version posted on the department’s Web site Tuesday night.

The review by the Accountability Review Board said the temporary, lightly defended compound where Stevens died lacked disciplined oversight of its security operations. The diplomatic post’s ad hoc nature, with inexperienced staff members working there for short periods, “resulted in diminished institutional knowledge, continuity, and mission capacity,” the report said.

Finally, the report said State Department officials in Washington ignored requests from the U.S. Embassy in Tripoli, the Libyan capital, for additional guards and better security for the Benghazi compound, which served as a temporary U.S. consulate for eastern Libya. It also said that there had been worrisome incidents in the weeks before the attack that should have led to increased security, but the report did not identify any specific threats to the compound on Sept. 11.

The report said State Department security personnel on the scene and CIA officers at a nearby annex used as an operations base had responded in a timely and appropriate manner, and it absolved the U.S. military of any blame, saying there was not enough time for a military response that would have made any difference.

Despite the broad security failures, the report did not single out any individual officials as violating procedures and did not recommend any disciplinary action.

The report concluded that, contrary to initial reports by the Obama administration and by media outlets, there was no protest outside the outpost ahead of the attack and that the assault on the diplomatic compound and the CIA annex was carried out by terrorists.

Stevens and another diplomat, Sean Smith, were killed inside the compound. Two other Americans, CIA contractors Tyrone Woods and Glen Doherty, died in the attack on the annex. Ten people were injured in the assault.

The panel’s report “provides a clear-eyed look at serious, systemic challenges,” Secretary of State Hillary Rodham Clinton wrote in letters to the Senate Foreign Relations Committee and the House Foreign Affairs Committee. She said that the State Department had already begun to address the lapses and that she accepts “every one” of the recommendations for improvement.

Officials said Clinton will ask Congress to transfer $1.3 billion in money allocated to Iraq. The funds would be used for additional Marine guards, diplomatic security personnel and security improvements at U.S. missions overseas.

The report called on Congress to fully fund the request for additional security funds. “For many years the State Department has been engaged in a struggle to obtain the resources necessary to carry out its work with varying degrees of success,” the report said. The result, it said, has been inefficiencies that sacrifice security for savings.

An unclassified summary of the report was posted on the State Department’s Web site. A copy of Clinton’s letter was provided to reporters. More-detailed classified versions were made available earlier Tuesday to congressional leaders and the two committees in preparation for testimony by Deputy Secretaries William J. Burns and Thomas R. Nides on Thursday.

The Benghazi attack became a major issue in the presidential campaign, with GOP candidate Mitt Romney and numerous Republicans in Congress criticizing the Obama administration for what they viewed as poor security at the compound. Republicans also have been critical of initial administration reports that said the attack grew out of protests outside the Benghazi outpost over a U.S.-made anti-Islam video.

The report describes a somewhat loose and confusing arrangement for security and accountability at the site. It notes that everyone involved in Stevens’s trip to Benghazi from Tripoli for a week of meetings with local officials was aware of the potential for increased risk associated with the anniversary of the Sept. 11, 2001, attacks. As a result, Stevens was confined to the post on that day.The panel faulted Libyan guards who had been hired to protect the compound, saying that they may have abandoned their posts at the front gate and allowed the attackers to overrun the facility. The report also said that the response of the Libyan government was “profoundly lacking on the night of the attacks, reflecting both weak capacity and a near total absence of central government influence in Benghazi.”

But the report also suggests that Stevens put himself in danger. It notes that he did not perceive an outsize risk created by traveling to Benghazi and that his deep experience in Libya and his management style meant that he made many decisions himself.

“His status as the leading U.S. government advocate on Libya policy, and his expertise on Benghazi in particular, caused Washington to give unusual deference to his judgments,” the report said.

The report found significant lapses in judgment and oversight by a few unidentified State Department employees but said no mistake amounted to a dereliction of duty. It did not recommend that anyone be fired.

First among the recommendations in the report is a general improvement in security for front-line posts in conflict zones and other dangerous countries. The United States cannot rely so heavily on the security forces of host countries, the report said.

“The department should urgently review the proper balance between acceptable risk and expected outcomes in high risk, high threat areas,” the report said.

Abandoning such posts is not acceptable, but neither is sending people to them without adequate support and forethought, the report said. It recommends a cost-benefit analysis of the mission, the risk and the responsibilities.

The five-member panel was led by former ambassador Thomas R. Pickering and included retired Adm. Mike Mullen, the former chairman of the Joint Chiefs of Staff. The two men are scheduled to present their findings in closed-door, classified meetings on Wednesday with the Senate and House foreign affairs panels.
Posted by Steve Douglass at 1:31 PM No comments: 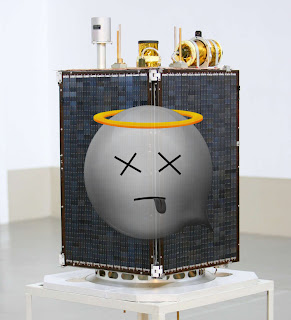 Astronomers from Harvard have confirmed that the North Korean satellite launched into space last week is tumbling in orbit and that no transmission has been received from it, signals that the spacecraft is almost certainly inactive. Experts have denied the possibility that the satellite could fall quickly back to Earth.

North Korean media has not commented on the spacecraft’s dysfunction, instead it has been focusing on describing its launch as a triumphal achievement of their leader.

The Kwangmyongsong-3 satellite is approximately the sixe of a washing machine and it is supposed to carry a camera on board for Earth-observation objectives. If this is true, that the satellite is tumbling in orbit, inflames suspicions that it is not working at all because it would need to be still so that the camera always points toward the planet.

Experts indicate that tumbling is a sign that stabilization on-board systems have failed. Optical astronomers have observed the satellite brightening and dimming as it slowly rotates through space end over end. a

Posted by Steve Douglass at 11:18 AM No comments: