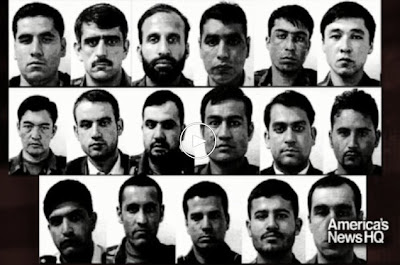 A nationwide alert has been issued for 17 members of the Afghanistan military who have gone AWOL (Absent With Out Leave) from an air Force base in Texas, where foreign military officers who are training to become pilots can learn English.

Fox News reports that, “the Afghan officers and enlisted men have security badges that give them access to secure U.S. defense installations, according to the lookout bulletin, ‘Afghan Military Deserters in CONUS (Continental U.S.) written by Naval Criminal Investigative Service in Dallas and obtained by Fox News.com”

On Wednesday night, “the Be-on-the-Lookout (BOLO) bulletin was distributed to local and federal law enforcement officials.”

The Afghan troops were attending the Defense Language Institute at Lackland Air Force Base in Texas. Military pilot candidates and other Air force prospects from foreign nations allied with the U.S. are taught English at the DLI program.

Gary Emery, Chief of Public Affairs, 37th Training Wing, at Lackland AFB, said, “I can confirm that 17 have gone missing from the Defense Language Institute. They disappeared over the course of the last two years, and none in the last three months.”

According to Fox, “the most recent Afghan to disappear from Lackland was First Lt. Javed Aryan, who went AWOL in January 2010, Emery told FoxNew.com. The others listed in the NCIS report disappeared at various times last year.”

Apparently, the Air Force waited months and years, before alerting the public that at least 17 Afghan troops may be prowling the streets of America, perhaps to determine how to properly conduct another terrorist mission for al-Qaeda and Osama bin-Laden.

UPDATE: Seven of the AWOL Afghanis have been caught - ten are still missing.
Posted by Steve Douglass at 1:34 PM No comments:

L-3 Unit under investigation or spying ...

The U.S. government has suspended a unit of L-3 Communications, New York, from doing any new business with government agencies. The government is investigating whether employees at the unit improperly used a military e-mail network to monitor other employees and government workers.

The L-3 unit monitored the e-mails to see if its employees had shared information with another contractor, the memo said, according to Reuters.

The JOG contract is estimated to generate about $450 million in annual revenue for L-3 and contribute about $25 million to earnings before taxes, according to a research note from Jefferies & Co., a New York investment bank.

In documents filed June 9 with the U.S. Securities and Exchange Commission, L-3 said the unit is still working on outstanding orders under its existing contracts, and that the suspension will stay in effect until it's lifted by the Air Force. The Air Force also is considering suspending L-3 Integrated Systems, the parent firm of SSPD, L-3 said.

An L-3 spokeswoman declined June 18 to comment on the suspension.
Posted by Steve Douglass at 7:10 AM No comments: