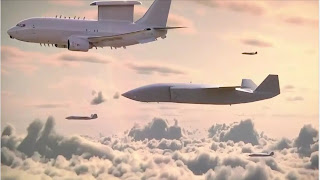 A large drone designed for electronic warfare, which could eventually carry bombs, will be publicly unveiled today after being secretly developed with the Royal Australian Air Force (RAAF).

The drone is the first combat aircraft designed and developed in Australia in more than 50 years
The cost of the project has not been revealed, but it is believed to be Boeing's largest investment in drones outside the US
Once fully developed, the drone could eventually be exported to other nations, sources said

The unmanned system is roughly the size of a traditional jet fighter and was quietly developed in Brisbane by aerospace giant Boeing, in collaboration with the RAAF and the Defence Department.

A prototype of the yet-to-be-named unmanned aerial vehicle (UAV) is expected to be unveiled this morning by Defense Minister Christopher Pyne at the Avalon aerospace trade show outside Melbourne.

Details of the classified "Loyal Wingman" project remain scant, but the ABC believes the UAV is designed to fly up to several thousand kilometres.

Its primary purpose would be to conduct electronic warfare and reconnaissance missions, particularly in environments where it is considered risky to send manned aircraft.

On the aircraft's underside is a large payload bay that can carry a sensor or electronic warfare equipment, but industry sources said it could also be used to one day carry bombs.