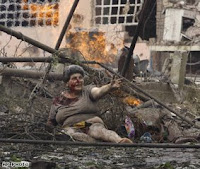 WASHINGTON (CNN) -- Russia's use of strategic bombers and ballistic missiles against Georgia's civilians outside of the South Ossetian conflict is "far disproportionate" to Georgia's alleged attack on Russian peacekeepers, a senior U.S. official said Saturday.

The official was not authorized to speak on the record due to the sensitive nature of the diplomacy.

Russia's use of its potent air weaponry signals a "severe" and "dangerous escalation in the crisis," the official said.

"For the life of me, I can't image that being a proportionate response to the charge that Georgia has attacked Russian peacekeepers," the official said. "It's hard for us to understand what Russia's plan is here."

The official said Russia is probably trying to destabilize Georgia politically to kill its chances of joining NATO.

Georgia wants to join NATO, but Russia opposes the move, concerned that the alliance's eastward march will erode its influence. NATO rejected Georgia's membership bid in April despite strong lobbying from U.S. President Bush, though the alliance promised that Georgia could join at a later date. Watch President Bush comment on conflict »

Still, Georgia bears some of the blame for the fighting over South Ossetia, the official said. Recently, the United States has had "very blunt exchanges with" Georgia, telling its leaders that they have no chance of winning a war with Russia and that they should stick to a path of diplomacy.

See the full story at CNN.com
Posted by Steve Douglass at 8:46 PM No comments: 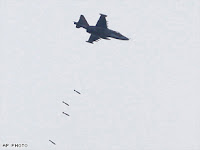 A warplane drops bombs near the Georgian city of Gori on Friday as Russian and Georgian forces battle.

"We are dealing with absolutely criminal and crazy acts of irresponsible and reckless decision makers, which is on the ground producing dramatic and tragic consequences," Saakashvili said.

Saakashvili compared the Russian invasion, which he called unprovoked, to the 1979 Soviet invasion of Afghanistan.

President George W. Bush called for an immediate halt to the fighting saying the United States is "deeply concerned."

"We have urged an immediate halt to the violence and a standown by all troops, and call for end to the Russian bombings and a return by the parties to the status quo of August the sixth," he said in a statement Saturday.

Russian paratroopers entered the capital of South Ossetia on Saturday as part of a military operation that Russia said was intended to force the Georgian side to cease fire.

Separatist-backed South Ossetian sources reported about 1,600 people have died and 90 have been wounded in the capital of Tskhinvali after two days of fighting, but Georgian officials said the figure was inflated. The Georgians said they didn't have their own death toll, but it would likely be closer to 100.

Inna Gagloyeva, the spokeswoman for the South Ossetian Information and Press Committee, told the Interfax news agency the capital was being "massively shelled" with artillery guns.

It was also unclear which side was in control of Tskhinvali on Saturday, with the Georgian side saying fighting still raged but the Russians saying they have "liberated" the city.

"Battalion task forces have fully liberated Tskhinvali of Georgian armed forces and started pushing Georgian units out of the area of responsibility of the peacekeeping forces," said General Vladimir Boldyrev, commander of the Russian Ground Forces, in an interview with Interfax.
Posted by Steve Douglass at 5:37 AM No comments: