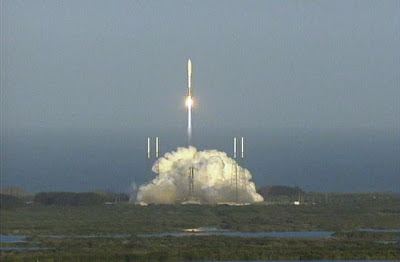 The launch happened Saturday at 5:46 p.m. after crews ran into some technical problems.

The United Launch Alliance said workers at the pad need more time to replace a "regulator valve on a piece of equipment on the system that provides a helium purge to the rocket's interstage adapter area."

On Friday, the X37-B experimental space plane was set to head to orbit on an Atlas V rocket from Cape Canaveral Air Force Station on a second test run.

The unmanned craft is about the size of two and a half mini-vans and looks like a mini shuttle, based on a NASA prototype from the 1990s that was never built.

Now the space plane in the hands of the Air Force, which through these tests hopes to usher in a new era of reusable space technology.

In the future, planners hope to conduct experiments, rendezvous with other spacecraft and stay in low-Earth orbit for up to 270 days.

The OTV test falls under the Air Force umbrella, which means it is classified by the military.

With that, much of the mission is secret, but the first craft stayed in orbit until landing at Vandenberg on Dec. 3, 2010.
Posted by Steve Douglass at 7:46 PM No comments:

Posted by Steve Douglass at 4:41 PM No comments: