John Glenn to mark 50 years since orbit of Earth 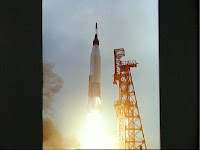 COLUMBUS, Ohio -- John Glenn plans to mark the 50th anniversary of his historic spaceflight with a series of events at Ohio State University, including a special dinner and a live chat with crew members aboard the International Space Station.

The former astronaut and senator from Ohio became the first American to orbit Earth on Feb. 20, 1962. The trip helped the United States catch up to the Soviet Union's accomplishments in space, and Glenn says he thinks it was a turning point for America's national psyche.

The 90-year-old is now the namesake of a public affairs school at Ohio State. That's where he and NASA administrator Charles Bolden will speak with the space station Monday before a celebratory dinner and a speech by former astronaut Mark Kelly.
Posted by Steve Douglass at 6:19 AM No comments: