US Navy launches drone from sub 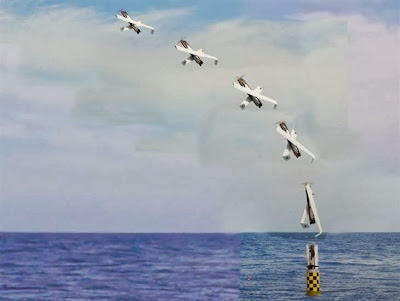 NBC: The U.S. Navy says it has successfully launched a drone from a submerged submarine, another big step toward developing new military spying and reconnaissance capabilities.

In a press release, the U.S. Naval Research Laboratory said the fuel-cell-powered "XFC" unmanned aircraft was fired from the torpedo tube of the USS Providence using a launch system known as Sea Robin.

The launch system was designed to fit within an empty canister used for launching Tomahawk cruise missiles. Once ejected from the canister, the launch vehicle with the drone rose to the ocean surface; the drone's wings then unfolded and the vehicle took vertical flight for several hours.

The XFC drone streamed live video back to the Providence, support vessels and Navy officials before landing at the Naval Sea Systems Command Atlantic Undersea Test and Evaluation Center in the Bahamas.

The Navy released a time-lapse photo taken of the underwater launch but didn’t reveal exactly where — or when — the operation took place.

The sub launch came after nearly six years of development. The project received funding from SwampWorks at the Office of Naval Research and the Department of Defense Rapid Reaction Technology Office.

"Developing disruptive technologies and quickly getting them into the hands of our sailors is what our SwampWorks program is all about," said Craig A. Hughes, acting director of innovation at ONR.

The Navy said the successful launch of a remotely deployed drone ”offers a pathway to providing mission critical intelligence, surveillance and reconnaissance capabilities to the U.S. Navy's submarine force.
Posted by Steve Douglass at 9:14 PM No comments: