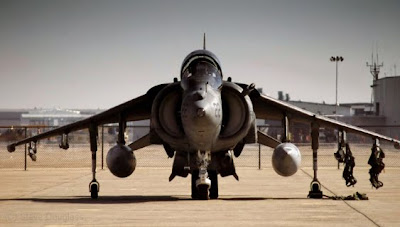 The Navy and Marine Corps have agreed to buy Britain’s entire decommissioned fleet of 74 Harrier jump jets, along with engines and spare parts — a move expected to help the Corps operate Harriers into the mid-2020s and provide extra planes to replace aging two-seat F-18D Hornet strike fighters.

A spokesman for the British Ministry of Defence confirmed the Disposal Services Agency was in talks with the Navy for the sale of the Harriers. The deal had yet to be concluded, he said Friday.

Britain retired its joint force of Royal Air Force and Royal Navy Harrier aircraft late last year in one of the most controversial moves of the defense reductions, which also cut the aircraft carriers that operated the jets, other warships, maritime patrol planes and personnel.

Most of the retired Harriers are stored at Royal Air Force Base Cottesmore, England. They have been undergoing minimum fleet maintenance, including anti-deterioration measures, in order to keep them airworthy, Heinrich said.

A spokesman for the Navy’s Naval Air Systems Command declined on Friday to comment on the deal, deferring to the British military.

A British MoD source said Friday that he thought both deals could be signed in the next week or two. The MoD source confirmed that the entire fleet of 74 Harrier aircraft was involved in the sale.

Heinrich noted that payment details were the only outstanding issue on the parts deal discussions, and he said the purchase will give the Corps a relatively economical way to get their hands on key components to keep the Harrier fleet running.

While it is unusual for the U.S. to buy used foreign military aircraft for operation, integration of the British planes into Corps squadrons shouldn’t be a major problem, one expert said.

“I don’t think it will be costly to rip out the Brit systems” and replace them with Marine gear, said Lon Nordeen, author of several books on the Harrier.

Nordeen noted that the British GR 9 and 9As are similar in configuration to the Marines’ AV-8B night attack version, which makes up about a third of U.S. Harriers. The British planes also are night planes dedicated to air-ground attack, he said, and while both types carry Forward Looking Infrared sensors, neither is fitted with a multimode radar such as the APG-65 carried by U.S. AV-8B+ models.

The absence of the big radar, Nordeen said, makes the GR 9A and AV-8Bs “a better-performing plane. Weighing less, it’s more of a hot rod.”

READ THE REST OF THE STORY HERE
Posted by Steve Douglass at 7:48 AM No comments: