FBI probe reveals web-cam was used to spy on students. 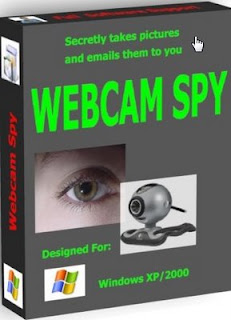 (CNN) -- The FBI has opened an investigation into allegations that a Pennsylvania school official remotely monitored a student at home, a law enforcement official with knowledge of the case told CNN on Saturday.

The official, who asked not to be identified, said the FBI became involved in the case after a family filed a lawsuit against the Lower Merion School District, located outside of Philadelphia, Pennsylvania.

The family accused an assistant principal at Harriton High School of watching their son through his laptop's webcam while he was at home and unaware he was being watched. The family also says the school official used a photo taken on a laptop as the basis for disciplining the student.

"At no time did any high school administrator have the ability or actually access the security-tracking software," he said. "We believe that the administrator at Harriton has been unfairly portrayed and unjustly attacked in connection with her attempts to be supportive of a student and his family. The district never did and never would use such tactics as a basis for disciplinary action."

A school official said it was a mistake not to make families aware of a feature allowing the school to monitor the computer hardware.

The law enforcement official with knowledge of the case told CNN that the FBI will try to determine whether federal wiretap or computer intrusion laws were violated.

But FBI spokesman J.J. Klaver said he could not disclose the existence of an investigation.

In a lawsuit seeking class-action status filed Wednesday in U.S. District Court for the Eastern District of Pennsylvania, Michael and Holly Robbins of Penn Valley are suing the school district, its board of directors, and the superintendent. They claim that the district unlawfully used its ability to remotely access a webcam on their son's laptop computer, which was issued by the district.

The lawsuit says that on November 11, 2009, the plaintiff's son was told by the assistant principal at Harriton High School that he was caught engaging in "improper behavior" in his home which was captured in an image via the webcam. According to the Robbins' complaint, neither they nor their son were informed of the school's ability to remotely access the webcam. It is unclear what the boy was doing in his room or if any punishment was given out.

Doug Young, spokesman for the Lower Merion School District, told CNN that the district would only remotely access a laptop if it was reported lost, stolen or missing.

If that happened, the district would first have to request access from its technology and security department and receive authorization, he said. Then it would use the built-in security feature to take over the laptop and see whatever was in the webcam's field of vision, potentially allowing them to track down the missing computer.

During the 2009-2010 school year, 42 laptops were reported lost, stolen or missing, and the tracking software was activated by the technology department in each instance, according to McGinley's statement. A total of 18 laptops were found or recovered.

"Despite some reports to the contrary, be assured that the security-tracking software has been completely disabled," McGinley said in the statement.

"This feature was limited to taking a still image of the computer user and an image of the desktop in order to help locate the reported missing, lost, or stolen computer (this includes tracking down a loaner computer that, against regulations, might be taken off campus)."

In the "acceptable-use" agreement, the families are made aware of the school's ability to "monitor" the hardware, Young said, but it stops short of explicitly explaining the security feature. He said that was a mistake.

Young told CNN that the district is very proud of the laptop program and its ability to close the technology gap between students who have computers at home and those who don't. He acknowledged that the schools have to take a step back to re-evaluate the policies and procedures surrounding the program.

Multiple requests for further comment from the lawyer for the Robbins', Mark Haltzman of Lamm Rubenstone LLC, went unanswered.

Posted by Steve Douglass at 4:22 PM No comments:

CSETI ET Hoax Revealed - too easily I might add. 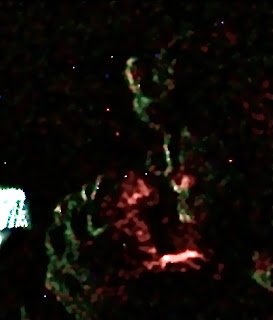 Every once in awhile I am given a challenge. These challenges come in the form of digital photographs either purporting to be of new secret black project aircraft or UFOs.

I relish these tests. I just love taking a photo apart (down to the pixel level) and discovering if it is the real deal, or a combination of Photoshop technique and (or) Adobe AfterEffects used to create that (on the surface) looks very much like an incredible capture but in reality is a hoax.

Recently with the availability of inexpensive (but sophisticated) image editing software, good looking fakes are proliferating through the Internet and unfortunately many (including the mainstream media) are falling for them without as much as a taking a second glance or considering the source of the material.

Case in point being the now infamous "Iran you suck at PhotoShop" images where a photo of an Iranian missile test was Photoshopped (quite clumsily) to portray they successfully launched more missile than they really did.

Many top news agencies and media outlets fell for this one, including, The Los Angeles Times, The Financial Times, The Chicago Tribune and several other newspapers as well as many major news Web sites, including nytimes.com, BBC News, MSNBC and Yahoo! News.

Now today - comes in my e-mail, a photo purporting to be of a visitation of an extraterrestrial being at an annual "training event in Joshua Tree National Park to contact extraterrestrial civilizations."

The attached photo showed what looked like two lawn chairs illuminated by moonlight and to the left some kind of amorphous blog supposedly the extraterrestrial being in question.

My first impression was it was just another blurry photograph, possibly a tree or someone standing close to the camera out of focus - and didn't look at all like any of the aliens we've come accustomed to on TV or in movies.

Intrigued - I decided to read the back story - and man what a back story! I won't rehash it here, but even at the risk of sending more traffic to their website I'll post a link HERE.

Note: Before you read the article, make sure you click on each image ( to enlarge) and save them to your hard drive before they are quickly replaced with new ones (that do not include the EXIF data) because that is where the hoaxer went wrong.

Although in the story "The provenance of the photograph is not in doubt. Raven Nabulsi is a long-standing, trusted member of the CSETI team. Moreover, in 2009, she had asked the ETs to allow her to photograph them, even when not seen with the naked eye." the truth is the photo is a fake and it can be proved very easily by just looking at the included EXIF data.

What is EXIF data?

EXIF was created by the Japan Electronic Industries Development Association (JEIDA). Version 2.1 of the specification is dated June 12, 1998, and the latest, version 2.2 dated April 2002, is also known as Exif Print.

This data is embedded in a file by the camera and attached (invisibly) to each image. Digital cameras will record the current date and time and save this in the metadata, along with camera settings and type. This includes static information such as the camera model and make, and information that varies with each image such as orientation (rotation), aperture, shutter speed, focal length, metering mode, and ISO speed information. A thumbnail for previewing the picture on the camera's LCD screen, in file managers, or in photo manipulation software.

This EXIF data is what trips up most hoaxers. They aren't aware the data even exists. All one has to do is download one of the many free EXIF data reading programs (such as EXIF VIEWER) but it is also included in later versions of Photoshop.

However, some hoaxers (the good ones) have learned how to change the EXIF data, but apparently not "Raven Nabulsi"

In any event, before doing a forensic analysis of any photograph, I first look at the EXIF data to see the truth about the exposure, date, type camera, etc and see how it jives with description given by the poster.

Low and behold - the EXIF reveals all.
The primary image was taken at the time and date the article states, but layered on top of that image is the data for another image taken in 2003 - more than enough information to prove the image is fake, fake, fake.

But don't take my word for it - do the work yourself. Read the EXIF data on all the photos, including the reference photos which were taken on a Nikon D-40 in 2010.

Do it soon - though, before photos missing their EXIF data replace the ones that are posted as of this writing.

Let me know if they are, because I have the originals

Sorry Dr. Greer - The truth is out there -but this ain't it! 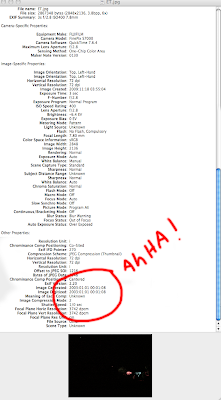