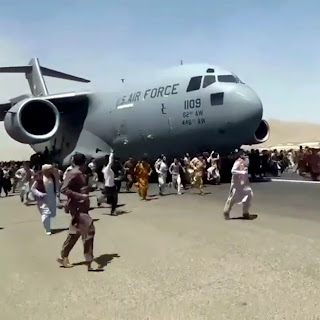 AIR FORCE TIMES: An American C-17 crew tasked with evacuating people from Kabul last August followed the rules of engagement and the law of armed conflict when they decided to take off amid a mob of frantic Afghans on the runway, killing multiple people who clung to the transport jet, the Air Force said in a release Monday.

Video footage that went viral on social media showed people falling from the outside of the enormous Globemaster III as it began its ascent from Hamid Karzai International Airport on Aug. 16, 2021. Human remains were found in the airlifter’s wheel well once it landed at Al Udeid Air Base in Qatar, spurring an Office of Special Investigations inquiry into the loss of life.

The C-17 had arrived with equipment to support the humanitarian airlift, but was surrounded by hundreds of Afghan civilians who had breached the airport. The jet taxied through the crowd and escaped.

Airmen used sound judgment in getting airborne as quickly as possible during the “unprecedented and rapidly deteriorating security situation,” service spokesperson Ann Stefanek said. “The aircrew’s airmanship and quick thinking ensured the safety of the crew and their aircraft.”
The Washington Post, which first reported the discovery of the remains, noted that the pilots declared an in-flight emergency when they could not pull up their landing gear.
Upon landing at Al Udeid, Air Force investigators impounded the aircraft to collect the human remains and turned the matter over to Qatari police, who did not investigate further.
Posted by Steve Douglass at 3:40 PM No comments:

Satellite images indicate Iran may be readying for space launch 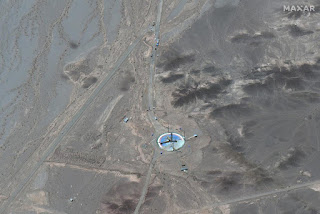 The images from Maxar Technologies showed a launch pad at Imam Khomeini Spaceport in Iran’s rural Semnan province, the site of frequent recent failed attempts to put a satellite into orbit.

One set of images showed a rocket on a transporter, preparing to be lifted and put on a launch tower. A later image Tuesday afternoon showed the rocket apparently on the tower.

Iran did not acknowledge a forthcoming launch at the spaceport and its mission to the United Nations in New York did not immediately respond to a request for comment.

However, its state-run IRNA news agency in May said that Iran likely would have seven homemade satellites ready for launch by the end of the Persian calendar year in March 2023. A Defense Ministry official also recently suggested Iran soon could test its new solid-fueled, satellite-carrying rocket called the Zuljanah.
READ MORE HERE:
Posted by Steve Douglass at 1:32 PM No comments: