British Rock Is a Spy Rock ... 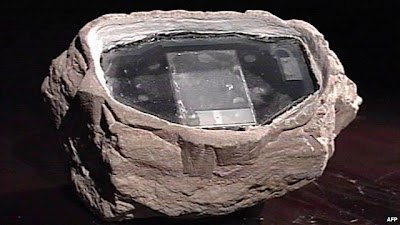 Britain has admitted for the first time that it was caught spying when Russia exposed its use of a fake rock in Moscow to conceal electronic equipment.

Russia made the allegations in January 2006, but Britain has not publicly accepted the claims until now.

Jonathan Powell, then Prime Minister Tony Blair's chief of staff, told a BBC documentary it was "embarrassing", but "they had us bang to rights".

He added: "Clearly they had known about it for some time."

They had been "saving it up for a political purpose", he said.

The story was first aired on Russian television, which ran a report showing how the rock contained electronic equipment and had been used by British diplomats to receive and transmit information.

It showed a video of a man walking along the pavement of a Moscow street, slowing his pace, glancing at a rock and slowing down, then picking up his pace. Next the camera films another man, who walks by and picks up the rock.

The Russian security service, the FSB, linked the rock with allegations that British security services were making covert payments to pro-democracy and human rights groups.


READ THE REST OF THE STORY HERE
Posted by Steve Douglass at 8:15 PM No comments:

Iran says it could ambush US carriers with submarines ... 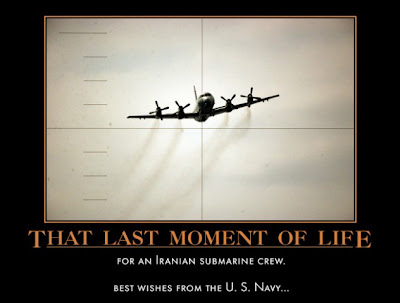 Chalk this one up to more bluster, or part of a mounting back and forth rhetoric headed nowhere good, either way — Tehran plans to rely on its subs.

Lieutenant Commander of the Iranian Army's Self-Sufficiency Jihad, Rear Admiral Farhad Amiri told FARS that Iran has the finest electric diesel submarines in the world, and that while the U.S. has focused on Tehran's "astonishing surface capabilities," it has forgotten about the underwater threat.

Amiri said he plans to slip his fleet of subs onto the Persian Gulf floor and "fire missiles and torpedoes simultaneously."

Iran claims to have 17 Ghadir diesel electric subs in its fleet, and four have been photographed together, so the threat is not entirely without merit.

The Ghadir is incapable of holding a commando crew, and despite scant details it may be well-equipped to follow through on this most recent threat.

Earlier this month Iran demanded the U.S. remove its carriers from the Gulf after the John C. Stennis passed through the Strait of Hormuz.

Iranian Army Commander Major General Ataollah Salehi said "We advise, warn and recommend [the U.S. Navy] not to return this carrier to its previous location in the Persian Gulf."

"We are not in the habit of repeating the warning and we warn only once," Salehi said, without mentioning the Stennis.