Tensions rise in Ukraine as US soldiers arrive in Poland 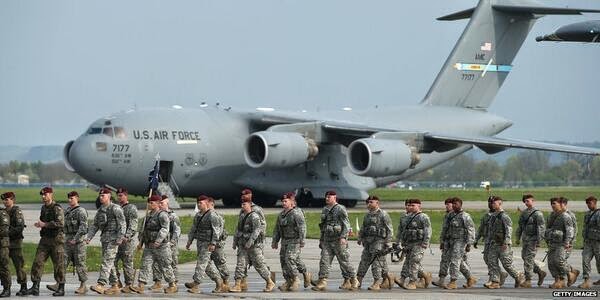 BBC: Some 150 soldiers, who landed in north-west Poland, are due to be followed in coming days by a further 450 troops.
Separately, the UK, Netherlands and Denmark scrambled fighter jets after two Russian military aircraft were spotted approaching their airspace.
Earlier, Russia's foreign minister said Moscow would respond to any attack on its interests in Ukraine.
Speaking on Russian state TV channel RT on Wednesday, Sergei Lavrov drew a parallel with the 2008 Georgian war, saying: "If our interests, our legitimate interests, the interests of Russians have been attacked directly.... I do not see any other way but to respond in full accordance with international law".
He also accused the US of "running the show" in Ukraine, and that it was "quite telling" that Kiev had re-launched its "anti-terrorist" operation in the east on Tuesday during a visit by US Vice-President Joe Biden.
US state department spokeswoman Jen Psaki dismissed his comments as "ludicrous". "Our approach here is de-escalation. We don't think there's a military solution on the ground," she said.
'Standard response'
The 150 soldiers from the 173rd Airborne Brigade arrived in the Polish town of Swidwin from their base in Vicenza, Italy.
Stephen Mull, the US ambassador to Poland, said the US had a "solemn obligation in the framework of Nato to reassure Poland of our security guarantee".

The troops are expected to be carrying out military exercises in Poland as well as in Lithuania, Latvia and Estonia for the coming months.
There has been growing concern in those countries at the build-up of thousands of troops in Russia along its borders with Ukraine in recent weeks.
Meanwhile, the UK's Ministry of Defence (MoD) has confirmed Russian military aircraft had been identified approaching the north of Scotland, but they turned away shortly after fighter jets were scrambled to investigate.
Military officials in the Netherlands and Denmark confirmed they too had scrambled jets to escort the jets away from their airspace.
"We just followed them and just turned back when we reached Germany," Anders Fridberg, spokesman for the Danish Defense Command, was quoted by the Associated Press as saying.
And in the seas around the UK, a Royal Navy warship is shadowing a Russian destroyer in what the MoD described as a "well established and standard response" as it sails past British territory.
READ THE REST OF THE HERE
Posted by Steve Douglass at 7:39 PM No comments: