The United States on Tuesday called North Korea's artillery attack on a South Korean island earlier in the day "outrageous," but said there will be no precipitous response. U.S. envoy for North Korea Stephen Bosworth is returning to Washington from Beijing after consultations with South Korean, Japanese and Chinese officials.

Officials here are not minimizing the seriousness of the artillery barrage, which came shortly after revelations of new North Korean nuclear activity.

But they say the Obama administration intends to move carefully and deliberately in the face of what the White House calls "belligerent action."

U.S. envoy for North Korea Stephen Bosworth, who was dispatched to the region earlier this week after Pyongyang revealed an apparent uranium enrichment plant, conferred with senior Chinese officials on the artillery attack.

Bosworth, who is due back in Washington on Wednesday, called the attack "aggression" and said the United States and China share the view that such conflict is "very undesirable."

He said the Obama administration plans a "measured and unified" response, working with China and other nations in the six-party talks on North Korea's nuclear program.

Toner did not rule out future engagement with North Korea. But he said Pyongyang will not be rewarded for belligerency.

"North Korea's behavior has been very, very bad; provocative and belligerent. And, again, we're not going to buy into that cycle of rewarding that kind of behavior. We're in a spot now where we just feel that by working through the six-party process, by working with our partners, we're going to take a deliberate, slow approach to responding to this latest provocation," said Toner.

China, North Korea's main ally and aid provider, has had a muted response to the artillery attack and recent nuclear developments - refraining from condemning Pyongyang and calling for a resumption of the six-party talks it chairs.

"What China has to do is step up to the plate, abide by international agreements, international commitments," Klinger said. "And instead, what it's been doing is increasing its economic engagement with North Korea in an unconditional manner, which really undermines the effectiveness of the U.N. sanctions as well as the conditionality that's inherently part of the six-party negotiations."
Posted by Steve Douglass at 2:18 PM No comments:

The discovery of a loaded gun clip aboard a Southwest Airlines jet on Tuesday sparked a security scare at the Phoenix airport, until it was determined that the clip was left by a law enforcement officer, the airline said.

The clip containing bullets was found on the cabin floor by a passenger aboard Southwest Flight 1297 from Burbank, California, to Phoenix Sky Harbor airport, airline spokesman Paul Flanigan told Reuters by telephone.

The plane was met at the gate by local police and personnel of the federal Transportation Security Administration (TSA), Flanigan said.

After a brief investigation, authorities determined that the clip belonged to a law enforcement officer who apparently had dropped it during a previous flight on the same aircraft, according to Flanigan. A clip is the part of a gun where the bullets or cartridges are stored.
Posted by Steve Douglass at 12:29 PM No comments:

2 Men removed from US Airlines Flight

US Airways Flight Searched In Colo., 2 Men Removed
DENVER (AP) ― Passengers on a US Airways flight from Charlotte, N.C., to Denver were briefly held on the plane upon arrival while the aircraft was searched. Two male passengers were taken off the plane by uniformed officers.

An Associated Press reporter who was on Flight 1525 Tuesday says officers brought a dog onto the plane, and it searched a bathroom at the rear of the jet. Passengers were allowed to disembark normally after the men were taken away. They weren't handcuffed and left calmly.

The Transportation Security Administration says before the plane landed, it was notified of a passenger "who raised concerns with the flight crew." The TSA says authorities met the flight and the passenger was being questioned.

It's not clear why the other person was also removed. 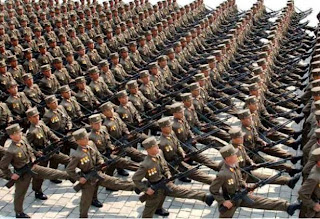 Seoul, South Korea (CNN) -- South Korea's president called on his military forces to use "action" and not talk to punish North Korea for deadly artillery attacks on Tuesday, but international diplomats appealed for restraint.

"The provocation this time can be regarded as an invasion of South Korean territory. In particular, indiscriminate attacks on civilians are a grave matter," President Lee Myung-bak said at the headquarters of the Joint Chiefs of Staff here, according to South Korea's Yonhap news agency.
"Enormous retaliation is going to be necessary to make North Korea incapable of provoking us again," Lee said.

"Given that North Korea maintains an offensive posture, I think the army, the navy and the air force should unite and retaliate against (the North's) provocation with multiple-fold firepower," he said.

Two South Korean marines were killed and 15 South Korean soldiers and civilians were wounded when the North fired about 100 rounds of artillery at Yeonpyeong Island in the Yellow Sea, South Korea authorities said, according to the South Korean Yonhap news agency. The attack also set houses and forests on fire on the island.


Firing between the two sides lasted for about an hour in the Yellow Sea, a longstanding flashpoint between the two Koreas. In March, a South Korean warship, the Cheonan, was sunk in the area with the loss of 46 lives in a suspected North Korean torpedo attack.

READ THE FULL STORY at CNN here
Posted by Steve Douglass at 8:09 AM No comments:


SEOUL, South Korea (AP) — North and South Korea exchanged artillery fire Tuesday after the North shelled an island near their disputed sea border, killing at least two South Korean marines, setting dozens of buildings ablaze and sending civilians fleeing for shelter.
The skirmish began when Pyongyang warned the South to halt military drills in the area, according to South Korean officials. When Seoul refused, the North bombarded the small South Korean-held island of Yeonpyeong, which houses military installations and a small civilian population.

South Korea returned fire and dispatched fighter jets in response, and said there could be considerable North Korean casualties as troops unleashed intense retaliatory fire. The supreme military command in Pyongyang threatened more strikes if the South crossed their maritime border by "even 0.001 millimeter," according to the North's official Korean Central News Agency.
Government officials in Seoul called the bombardments "inhumane atrocities" that violated the 1953 armistice halting the Korean War. The two sides technically remain at war because a peace treaty was never signed.

The exchange was a sharp escalation of the skirmishes that flare up along the disputed border from time to time, and come amid high tensions over North Korea's claim that it has a new uranium enrichment facility and just six weeks after North Korean leader Kim Jong Il unveiled youngest son Kim Jong Un as his heir apparent.
Columns of thick black smoke could be seen rising from homes on the island in footage aired by YTN cable television. Screams and shouts filled the air as shells rained down on the island for about an hour.

"I thought I would die," Lee Chun-ok, 54, told The Associated Press after being evacuated to the port city of Incheon, west of Seoul. "I was really, really terrified, and I'm still terrified."
She said she was watching TV when the shelling began, and a wall and door in her home suddenly collapsed.

The United States, which has more than 28,000 troops stationed in South Korea, condemned the attack. in Washington, White House Press Secretary Robert Gibbs called on North Korea to "halt its belligerent action," and said the U.S. is "firmly committed" to South Korea's defense, and to the "maintenance of regional peace and stability."

READ THE FULL STORY HERE
Posted by Steve Douglass at 6:23 AM No comments: