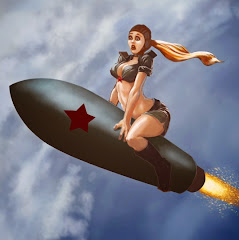 In a televised address, Putin said the action comes in response to threats coming from Ukraine. He added that Russia doesn’t have a goal to occupy Ukraine. Putin said the responsibility for bloodshed lies with the Ukrainian “regime.”

Zelenskyy said he asked to arrange a call with Putin late Wednesday, but the Kremlin did not respond.

In an apparent reference to Putin’s move to authorize the deployment of the Russian military to “maintain peace” in eastern Ukraine, Zelensky warned that “this step could mark the start of a big war on the European continent.”

“Any provocation, any spark could trigger a blaze that will destroy everything,” he said.

He challenged the Russian propaganda claims, saying that “you are told that this blaze will bring freedom to the people of Ukraine, but the Ukrainian people are free.”

Anxiety about an imminent Russian offensive against its neighbor soared after Putin recognized the separatist regions’ independence on Monday, endorsed the deployment of troops to the rebel territories and received parliamentary approval to use military force outside the country. The West responded with sanctions.

White House press secretary Jen Psaki said the separatists’ request for Russian help was an example of the sort of “false-flag” operation that the U.S. and its allies have expected Moscow to use as a pretense for war.

“So we’ll continue to call out what we see as false-flag operations or efforts to spread misinformation about what the actual status is on the ground,” she said.

Earlier in the day, Ukrainian lawmakers approved a decree that imposes a nationwide state of emergency for 30 days starting Thursday. The measure allows authorities to declare curfews and other restrictions on movement, block rallies and ban political parties and organizations “in the interests of national security and public order.”

The action reflected increasing concern among Ukrainian authorities after weeks of trying to project calm. The Foreign Ministry advised against travel to Russia and recommended that any Ukrainians who are there leave immediately.

“For a long time, we refrained from declaring a state of emergency ... but today the situation has become more complicated,” Ukrainian National Security and Defense Council head Oleksiy Danilov told parliament, emphasizing that Moscow’s efforts to destabilize Ukraine represented the main threat.

Pentagon press secretary John Kirby said the Russian force of more than 150,000 troops arrayed along Ukraine’s borders is in an advanced state of readiness. “They are ready to go right now,” Kirby said.

The latest images released by the Maxar satellite image company showed Russian troops and military equipment deployed within 10 miles of the Ukrainian border and less than 50 miles from Ukraine’s second-largest city, Kharkiv.

Early Thursday, airspace over all of Ukraine was shut down to civilian air traffic, according to a notice to airmen. A commercial flight tracking website showed that an Israeli El Al Boeing 787 flying from Tel Aviv to Toronto turned abruptly out of Ukrainian airspace before detouring over Romania, Hungary, Slovakia and Poland. The only other aircraft tracked over Ukraine was a U.S. RQ-4B Global Hawk unmanned surveillance plane, which began flying westward early Thursday after Russia put in place flight restrictions over Ukrainian territory.

Another wave of distributed-denial-of-service attacks hit Ukraine’s parliament and other government and banking websites on Wednesday, and cybersecurity researchers said unidentified attackers had also infected hundreds of computers with destructive malware.

Officials have long said they expect cyberattacks to precede and accompany any Russian military incursion, and analysts said the incidents hew to a nearly two-decade-old Russian playbook of wedding cyber operations with real-world aggression.

In other developments, Russia evacuated its embassy in Kyiv; Ukraine recalled its ambassador to Russia and considered breaking all diplomatic ties with Moscow and dozens of nations further squeezed Russian oligarchs and banks out of international markets.

“As I have made clear, we will not hesitate to take further steps if Russia continues to escalate,” Biden said in a statement.

Germany said Tuesday that it was indefinitely suspending the project, after Biden charged that Putin had launched “the beginning of a Russian invasion of Ukraine” by sending troops into the separatist regions. The pipeline is complete but has not yet begun operating.

Putin said Tuesday that he had not yet sent any Russian troops into the rebel regions, contrary to Western claims, and Donetsk rebel leader Denis Pushilin insisted Wednesday there were no Russian troops in the region, even though a local council member claimed the previous day they had moved in.

Already, the threat of war has shredded Ukraine’s economy and raised the specter of massive casualties, energy shortages across Europe and global economic chaos.

The Russian Foreign Ministry has shrugged off the sanctions, saying that “Russia has proven that, with all the costs of the sanctions, it is able to minimize the damage.”

Facing a barrage of criticism at the 193-member United Nations General Assembly, Russia’s U.N. ambassador, Vassily Nebenzia, warned Ukraine that Russia will monitor a cease-fire in the east and emphasized that “no one intends to go softly, softly with any violators.”

“A new military adventure” by Kyiv “might cost the whole of Ukraine very dearly,” he warned ominously.

After weeks of rising tensions, Putin’s steps this week dramatically raised the stakes. He recognized the independence of the separatist regions, a move he said extends even to the large parts of the territories now held by Ukrainian forces, and had parliament grant him authority to use military force outside the country.

Putin laid out three conditions that he said could end the standoff, urging Kyiv to renounce its bid to join NATO, to partially demilitarize and to recognize Russia’s sovereignty over Crimea, the Black Sea peninsula that Moscow annexed from Ukraine in 2014. Ukraine long has rejected such demands.

Posted by Steve Douglass at 7:14 PM No comments:

The US has issued a warning to Ukraine that new intelligence suggests Russia is about to launch a major assault as its forces take up positions inside rebel-held areas of eastern Ukraine, according to reports from CNN and Newsweek.

Ukrainian officials were told Tuesday morning local Kyiv time that it's highly likely Russia will begin an invasion in the next 4 hours, according to the Newsweek report. A top US official also told Newsweek that "reporting from aircraft observers indicates Russia violated Ukrainian airspace earlier today, flying possible reconnaissance aircraft for a short period over Ukraine."

CNN reported that this intelligence highlighted the risk to the country's second-largest city of Kharkiv, in the northeast region near the Russian border, information they attributed to a senior Ukrainian official and a Western official familiar with the intelligence.


Ukrainian officials said they have not independently verified the intelligence and said that the United States has issued several similar warnings in recent months before assaults that never happened.

NATO allies were given a similar warning, but a top NATO military official told CNN that "no one knows for sure" what Russian President Vladimir Putin is going to do. On Monday, Putin ordered Russian troops into areas of eastern Ukraine, ostensibly to defend separatists there who have been fighting

On Tuesday, the Ukrainian foreign minister said there are no plans to evacuate the city of Kharkiv, which US officials have warned is at particular risk in an assault.
Ukraine is expected to announce a 30-day state of emergency on Wednesday, according to the country's top security official.
Oleksiy Danilov, the secretary of Ukraine's National Security and Defense Council, said the state of emergency "can include restrictions on movement of transportation, additional inspections of transportation. This can include inspections of individuals' documents," the Financial Times reported.

On Wednesday, a senior defense official also disclosed that the US believes Putin has amassed nearly 100 percent of the forces they believe he would need to invade Ukraine, and that Russia may use its reserves and national guard, suggesting it was prepared to occupy territories gained.

BREAKING: Just hours ago Russia issued a NOTAMs closing the Eastern Ukraine to all civil  aircraft: 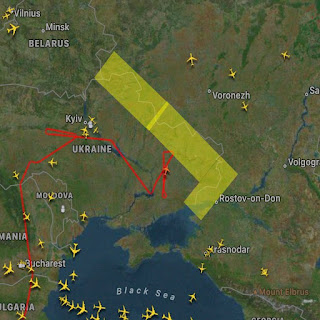 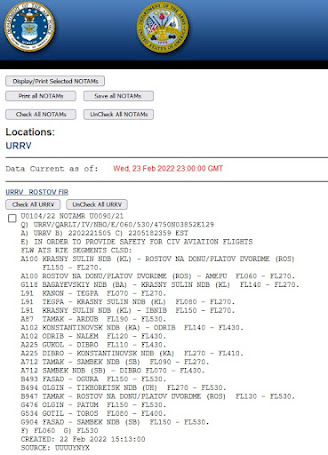 Posted by Steve Douglass at 4:07 PM No comments: