Neil Armstrong, first person to walk on moon, dies at 82 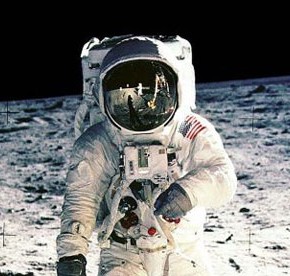 By Eric Malnic, Special to The Times

Neil Armstrong, the U.S. astronaut who was the first person to set foot on the moon, firmly establishing him as one of the great heroes of the 20th century, has died. He was 82.

When he made that famous step on July 20, 1969, he uttered a phrase that has been carved in stone and quoted across the planet: "That's one small step for [a] man; one giant leap for mankind."

Armstrong spoke those words quietly as he gazed down at his, the first human footprint on the surface of the moon. In the excitement of the moment, the "a" was left out -- either because Armstrong omitted it or because it was lost in the static of the radio transmission back to Earth.

For the usually taciturn Armstrong, it was a rare burst of eloquence seen and heard by 60 million television viewers worldwide. But Armstrong, a reticent, self-effacing man who shunned the spotlight, was never comfortable with his public image as a courageous, historic man of action.

"I am, and ever will be, a white-sock, pocket-protector, nerdy engineer," Armstrong once told a National Press Club gathering.

How many other nerdy engineers flew 78 combat missions as a Navy jet fighter pilot during the Korean War? Logged more than 1,000 hours as a test pilot in some of the world's fastest and most dangerous aircraft? Or became one of the first civilian astronauts and commanded Apollo 11, the first manned flight to land on the moon?

In the years that followed the flight of Apollo 11, Armstrong was asked again and again what it felt like to be the first man on the moon. In answering, he always shared the glory: "I was certainly aware that this was the culmination of the work of 300,000 to 400,000 people over a decade."

Neil Alden Armstrong was born Aug. 5, 1930, on his grandfather's farm near Wapakoneta, Ohio.

READ THE REST OF THE STORY AT THE LA TIMES
Posted by Steve Douglass at 4:39 PM No comments:

ABC NEWS: U.S. missiles slammed into three compounds close to the Afghan border Friday, killing 18 suspected militants, Pakistani officials said, just a day after the government summoned an American diplomat to protest drone strikes in the country's northwest tribal region.
The drones struck the North Waziristan tribal area, the main militant sanctuary in the country and the target of a planned Pakistani military operation that the U.S. expects in the near future. Hundreds of militants and their family members streamed out of North Waziristan in the past two days in anticipation of the operation, local residents said.
The U.S. has long demanded Pakistan target militants holed up in North Waziristan and has welcomed the planned operation in the area. But Pakistan is likely to focus on Taliban militants who have been at war with the state, not those who have been fighting the U.S.-led coalition in neighboring Afghanistan.
The suspected militant hideouts destroyed by U.S. drones Friday were hit minutes apart and were located several kilometers (miles) from each other in North Waziristan, said intelligence officials, speaking on condition of anonymity because they were not authorized to talk to reporters.
The U.S. has carried out seven drone strikes in the past week in North Waziristan, ignoring Pakistani protests that they violate the country's sovereignty. The attacks have exacerbated the already troubled relationship between the two countries, but the U.S. has refused to stop the strikes, saying they are vital to combating Taliban and al-Qaida militants who pose a threat to the West.
Pakistan's Foreign Ministry summoned a senior U.S. diplomat on Thursday to protest the wave of drone strikes.
On Friday, Foreign Ministry spokesman Moazzam Ahmad Khan called the attacks "illegal, unproductive." He said they were a "violation of our sovereignty and territorial integrity and in violation ... of international laws."
The Pakistani government is widely believed to have supported the strikes in the past. That cooperation has come under strain as the relationship between the two countries has deteriorated, but U.S. officials say privately that there are still senior members of Pakistan's government and military who condone the attacks. The U.S. rarely discusses the covert CIA-run drone program in Pakistan publicly.
The strikes are unpopular in Pakistan because many people believe they kill mostly civilians — an allegation denied by the U.S.
The suspected militant hideouts that were attacked Friday in the Shawal area of North Waziristan were each hit by two missiles, said the intelligence officials. Militants often use the hideouts when they are crossing into Afghanistan, the officials said. In addition to the 18 suspected militants who were killed, 14 others were wounded, they said.
In the earlier strikes in the tribal area, five allies of a powerful warlord, Hafiz Gul Bahadur, whose forces often attack U.S. troops in Afghanistan, died when a U.S. drone struck their hideout last Saturday. And on Sunday, American drones fired a flurry of missiles into North Waziristan, killing 10 suspected militants in two separate strikes. On Tuesday, missiles targeting a vehicle in the area killed five more suspected militants.
Posted by Steve Douglass at 9:43 AM No comments: