The Obama administration will add $100 billion to the Pentagon's 2011-'15 base budget plan to cover the rising cost of personnel and pressing modernization needs, officials said.

The Pentagon's 2010 budget request called for $534 billion, plus $130 billion to cover the wars in Afghanistan and Iraq. It did not include the estimated $30 billion that will be needed to fund President Barack Obama's recent decision to send 30,000 more troops to Afghanistan.

Nor did the 2010 spending plan contain the customary five-year spending outlook, although the new Obama administration had in January pledged annual defense spending of about $540 billion, plus inflation, plus $50 billion for operations.

Analysts called the decision a victory for Defense Secretary Robert Gates, who has lobbied the White House for more funding. Gates, who reviewed a draft of the Quadrennial Defense Review in early December, is to meet with the military services this week to discuss their spending plans, sources said. The QDR and 2011 budget request are due to Congress in February.

Gates, who scrutinized a draft version of the QDR on his trip last week to Afghanistan and Iraq, announced in Kirkuk, Iraq, that the review likely will endorse a new family of Air Force long-range strike systems that are manned and unmanned. In April, Gates pushed back funding for the Air Force's new bomber, stripping it from the 2010 budget.

The QDR and 2011 budgets are being shaped with an eye toward strengthening the U.S. defense industrial base, sources said. Pentagon acquisition chief Ashton Carter and industrial policy director Brett Lambert have said DoD must better preserve key industrial capabilities, in part by spending more. Lambert has said he worries about major prime contractors but is applying more focus on second-, third- and fourth-tier firms that supply critical components and skills.

"From a macro perspective, it means that the administration is focused on funding defense at the right level, that they are very sensitive to the strains on personnel and those concerns will be funded," Chao said. "To those who were focused on the programs and hardware side, it provides relief to the extent that programs don't have to be raided to support the people side of the department."

The Lexington Institute's Loren Thompson noted that Gates had pressed the White House to keep the Pentagon budget growing faster than inflation.

"It's important to understand that a significant amount is going to rising health care costs; however, there is no question increase of this magnitude will allow the continued modernization of weapons systems," Thompson said.

But Gordon Adams, a defense budget expert with Henry L. Stimson Center and American University, said the plus-up is back-loaded, with most of the money coming in the last years of the five-year plan.

"In the first year, it doesn't look like much, but in the out-years it's a big deal," Adams said. "But as Mark Twain is said to have said, making predictions is difficult, especially about the future. It's the near-term war that matters and they are not getting anything like the growth they wanted in year one, and that's where the real money is."
Posted by Steve Douglass at 6:40 AM No comments:

On the Horizon: The B-3 Bomber 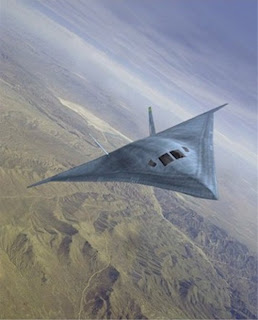 The long-talked-about program has been in limbo since Gates froze it in April amid several dozen major weapons program cuts. Gates wanted the 2010 Quadrennial Defense Review to look at the need for a new long-range bomber fleet.

"We are probably going to proceed with a long-range strike initiative coming out of the Quadrennial Defense Review and various other reviews going on," Gates told troops in Kirkuk, Iraq. "We're looking at a family of capabilities, both manned and unmanned."

He said funding likely would start at $1 billion, and then ramp up in subsequent years.
Posted by Steve Douglass at 6:34 AM No comments: 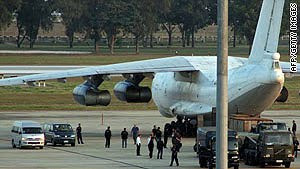 The pilot told Thai authorities the aircraft was headed to Sri Lanka, but its final destination was unknown, according to Panitan Wattanayagorn, a spokesman for the Thai prime minister.

It contained about 35 tons of weapons, including rocket-propelled grenades, shoulder-launched rockets and tubes that may be missile components, the spokesman said.

The plane, which was detained Saturday, had five people onboard -- four from Kazakhstan and one from Belarus. They will appear in court Monday on charges related to illegal weapons smuggling, the spokesman said.

Thai government officials acted after working with several intelligence agencies for several weeks, the spokesman said. The cargo was taken to a military base while the plane, which is registered in Georgia, remains at Don Muang.

READ THE FUL STORY HERE
Posted by Steve Douglass at 6:28 AM No comments: