This one is much more interesting:

Posted by Steve Douglass at 11:41 AM No comments:

North Korea calls on troops to be ready to "annihilate the enemy." 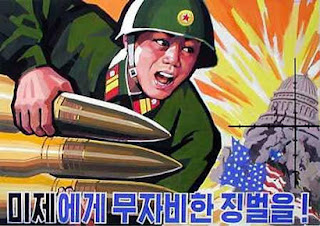 THE TELEGRAPH China has "expressed concern" over the current situation on the Korean peninsula which is "highly complex and sensitive", said a Foreign ministry spokesman.

Meanwhile, China's state media trilled its support for Beijing's decision to vote for UN sanctions against North Korea and called for them to be tightly enforced.

"We believe the resolution is a balanced one," said the Foreign ministry spokesman. "China is objective and fair on this matter and has played a constructive role throughout the discussion at the Security Council."

But the Global Times reminded the outside world that Beijing is "caught in the middle" trying to placate both Pyongyang and Washington.

The newspaper quoted Yu Shaohua, an analyst at a Foreign ministry think tank, who called for the international community to "leave some leeway for negotiations" with Kim Jong-un.

Earlier, Kim Jong-un visited North Korean troops on the border with the South and called on them to be ready "to annihilate the enemy," the latest broadside in an increasingly bitter war of words with Seoul and Washington.

Pictured with binoculars, Kim "stressed the need for the soldiers to keep themselves fully ready to go into action to annihilate the enemy any time an order is issued and instructed them to deal deadly blows at the enemies and blow up their positions," North Korean state media reported Friday.

Kim's comments come after the United Nations Security Council imposed new sanctions on Pyongyang for carrying out a third nuclear test in February.
Posted by Steve Douglass at 8:07 AM No comments: