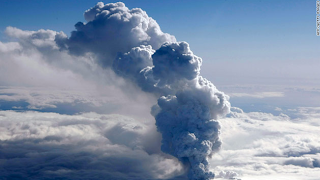 London, England (CNN) -- European countries shut their airspace one after the other Thursday as a cloud of volcanic ash wafted over from Iceland and posed a danger to flights.

Airspace over the United Kingdom was due to be closed for six hours from midday but air authorities later extended the closure until at least 7 a.m. BST (2 a.m. EST) Friday.
Ireland, Sweden, Norway, Belgium, Denmark and the Netherlands also announced the closure of their airspace, authorities in each country said.

Norway also closed its ocean territory and canceled helicopter flights to off-shore oil installations, according to Avinor, the Norwegian agency responsible for the Norwegian airport network.

Air Travel
In all, around 3,000 flights across Europe were expected to be affected by the closures, according to Eurocontrol, the intergovernmental body that manages European air travel.

Many airports were already shut and flights were grounded across the United Kingdom on Thursday because of the ash, which came after an eruption under an Icelandic glacier early Wednesday, airport authorities said.
The ash cloud came from an eruption of a volcano beneath Iceland's Eyjafjallajokull glacier early Wednesday.
The eruption -- the latest in a series that began on March 20 -- blew a hole in the mass of ice and created a cloud of smoke and ash that went high into the air.

The volcano was still active Thursday, creating floods in the area and producing a lot of volcanic ash, a spokesman for Iceland's Department of Civil Protection and Emergency Management told CNN.
The disruption was causing havoc for air travel around the world.
"There will be an immediate impact today in terms of passengers not being able to travel," said independent air transport consultant John Strickland, of JLS Consulting in England. "The key thing is we don't know how long it's going to last ... but even

if that were to be resolved, it will take some significant time for airlines to recover."
iReporter captures footage of eruption
Finland's air space remained opened but was "heavily restricted" according to airport controller Finavia.

In Germany, the Hamburg airport was open but flights to England, Norway, and Sweden were either canceled or delayed, a spokeswoman there said.

Stockholm Airport canceled around 20 flights to the rest of Europe and around 20 domestic flights, but a spokesman there said they expect the number to increase and the airport may shut later in the day.
Flights to or from Norway and Britain were canceled from several Spanish airports, the Spanish Airports and Air Navigation authority said.
Flights to the United Kingdom from Japan, Hong Kong, India and Australia were also affected. Etihad Airways announced that five flights between Abu Dhabi and England were canceled Thursday.

A spokeswoman at Charles de Gaulle airport in Paris said the airport remained open.
The U.S. Air Force says RAF Mildenhall and RAF Lakenheath in England are shut down for at least two days. That means dozens of U.S. Air Force F-15s and other fighter jets and tankers are not flying. Flights to Iraq and Afghanistan flying through that airspace are being diverted to other routes.

ASH AIR EMERGENCIES
April 1982 -- British Airways flight 009 en route to Auckland from London flew into a cloud of ash thrown up by the eruption of Mount Galunggung, Indonesia, causing engines to fail. Crew were eventually able to restart three engines and land safely in Jakarta after gliding through the cloud.

December 1989 -- KLM flight 867 en route to Anchorage in Alaska from Amsterdam flew into a volcanic ash cloud caused by eruption of Mount Redoubt in Alaska, resulting in failure of its engines as it tried to climb out of the cloud. Pilots were able to restart engines, two at a time, before landing the badly damaged airliner.
Manchester Airport spokesman Russell Craig said the ash poses a threat to aircraft, even if it isn't visible in the air.

"If you think about the way an aircraft engine works, it sucks in air, it compresses it, forces it out on the other side. That creates thrust," Craig told CNN. "If that air were mixed with ash, it can cause engine failure and electrical difficulties with an aircraft. It's happened before, and the aircraft didn't come out the other end in one piece."
Eric Moody was the pilot aboard a British Airways flight that managed to fly through volcanic ash thrown up by Mount Galunggung in Indonesia in 1982. All four of the engines stopped because of the ash, and the plane glided through the air for about 15 minutes, he told CNN on Thursday.

"The engines just ran down," Moody said. "We couldn't see out the windscreen and half the electronic aids to landing weren't working, either."

Passengers were told to prepare for an emergency crash landing, with Moody making this now-famous announcement to passengers: "Good evening, ladies and gentlemen, It's Captain Eric Moody here. We've got a small problem in that all four engines have failed. We're doing our utmost to get them going, and I trust you're not in too much distress."
Eventually at 13,000 feet, the engines started working again and the plane was able to land. That, said Moody, is why this Icelandic ash could be so dangerous.

"I don't know how thick this ash is, but I wouldn't go anywhere near it," Moody said.
Posted by Steve Douglass at 8:27 AM No comments: