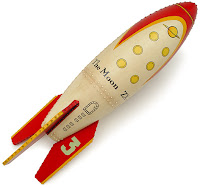 NEW DELHI (AP) — India launched its first mission to the moon Wednesday, rocketing a satellite up into the pale dawn sky in a two-year mission to redraw maps of the lunar surface.
Clapping and cheering scientists tracked the ascent on computer screens after they lost sight of Chandrayaan-1 from the Sriharikota space center in southern India. Chandrayaan means "Moon Craft" in ancient Sanskrit.
Indian Space Research Organization chairman G. Madhavan Nair said the mission is to "unravel the mystery of the moon."

"We have started our journey to the moon and the first leg has gone perfectly well," he said.
Chief among the mission's goals is mapping not only the surface of the moon, but what lies beneath. If successful, India will join what's shaping up as a 21st century space race with Chinese and Japanese crafts already in orbit around the moon.
To date only the U.S., Russia, the European Space Agency, Japan and China have sent missions to the moon.

As India's economy has boomed in recent years, it has sought to convert its newfound wealth — built on the nation's high-tech sector — into political and military clout. It is hoping that the moon mission — coming just months after finalizing a deal with the United States that recognizes India as a nuclear power — will further enhance its status.

While much of the technology involved in reaching the moon has not changed since the Soviet Union and the U.S. did it more than four decades ago, analysts say new mapping equipment allows the exploration of new areas, including below the surface.
India plans to use the 3,080-pound lunar probe to create a high-resolution map of the lunar surface and the minerals below. Two of the mapping instruments are a joint project with NASA.
In the last year, Asian nations have taken the lead in moon exploration. In October 2007, Japan sent up the Kaguya spacecraft.

A month later, China's Chang'e-1 entered lunar orbit.
Those missions took high-resolution pictures of the moon, but are not as comprehensive as Chandrayaan-1 will be or NASA's half-a-billion-dollar Lunar Reconnaissance Orbiter scheduled to be launched next year, Pace said. The most comprehensive maps of the moon were made about 40 years ago during the Apollo era, he said.

"We don't really have really good modern maps of the moon with modern instrument," Pace said. "The quality of the Martian maps, I would make a general argument, is superior to what we have of the moon."

NASA has put probes on Mars' frigid polar region, but not on the rugged poles of the moon. Yet the moon's south pole is where NASA is considering setting up an eventual human-staffed lunar outpost, Pace said.

Beijing in 2003 became the first Asian country to put its own astronauts into space. It followed that last month with its first spacewalk.

More ominously, last year China also blasted an old satellite into oblivion with a land-based anti-satellite missile, the first such test ever conducted by any nation, including the United States and Russia.

The Indian mission is not all about rivalry and prestige. Analysts say India stands to reap valuable rewards from the technology it develops and, according to Pace, it already shows increased confidence in difficult engineering and quality control.

The $80 million mission will test systems for a future moon landing, with plans to land a rover on the moon in 2011 and eventually a manned space program, though this has not been authorized yet.

The strike hit a checkpoint in the Sayed Kheil area of Khost province in eastern Afghanistan, said Arsallah Jamal, the province’s governor.

The U.S. said its forces “may have mistakenly killed and injured” Afghan soldiers in what may have been a case of mistaken identity “on both sides.”

“As a Coalition forces convoy was returning from a previous operation, they were involved in multiple engagements,” a U.S. military statement said. “As a result of the engagements, [Afghan National Army] soldiers were killed and injured.”

Col. Greg Julian, the chief spokesman for U.S. troops in Afghanistan, said American officials would meet with Afghan defense officials to “sort out the details.”

Jamal said U.S. and Afghan troops have been conducting operations in the region for over a week, and the army checkpoint was in a fixed location. The incident killed nine soldiers and wounded three, said Gen. Mohammad Zahir Azimi, the Defense Ministry spokesman.

Apparent friendly fire incidents have happened before. In June 2007, Afghan police mistook U.S. troops on a nighttime mission for Taliban fighters and opened fire on them, prompting U.S. forces to return fire and call in attack aircraft. Seven Afghan police were killed.

In the last month, uniformed Afghan police officers have twice opened fire on U.S. troops, killing two soldiers. The police officers were killed by U.S. soldiers returning fire, but the incidents raised fears that insurgents have infiltrated Afghanistan’s security forces as a cover to launch attacks.

In other violence, U.S. troops killed seven militants and detained seven others in a series of operations throughout Afghanistan, the military said in a statement. Among the dead was a Taliban leader in Helmand province responsible for attacks on coalition forces and Afghan security checkpoints, the U.S. said.

Himat said the battle was led by Afghan forces but also involved helicopter gunships. Afghan forces recovered 35 bodies from the battlefield, he said. Some 100 Taliban fighters were involved in the battle
Posted by Steve Douglass at 5:50 AM No comments: