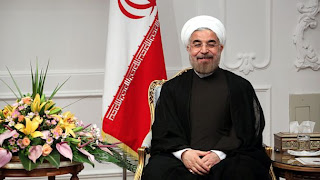 Rouhani, 65, a cleric considered moderate, won the June elections with reformist backing. He campaigned on a "hope and prudence" platform in which he appealed to traditional conservatives and reform-minded voters alike.

He pledged to improve the economy and unemployment. And as a former nuclear negotiator, he vowed to reduce the high tension between Iran and the outside world by addressing sanctions related to Iran's nuclear program.

The White House congratulated Rouhani, and in a statement called his inauguration "an opportunity" for Iran to "resolve the international community's deep concerns over Iran's nuclear program." Should Iran decide to engage on the nuclear issue, the statement read "it will find a willing partner in the United States."

Israel's Prime Minister Benjamin Netanyahu, speaking at his weekly cabinet meeting, said the president of Iran may have changed, "but the goal of the regime has not been replaced."

"Iran's intention is to develop a nuclear capacity and nuclear weapons in order to destroy the State of Israel," he added.

Iran insists its nuclear program is purely for civilian nuclear energy
Posted by Steve Douglass at 7:32 AM No comments: