Eco Airships of the Future! 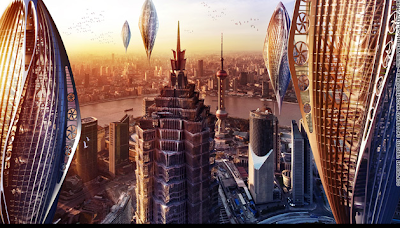 CNN) -- How will we travel in the future?
Belgian architect, Vincent Callebaut thinks it might be like this -- floating from one place to another in giant eco-airships.

Called "Hydrogenase," the project combines engineering and biology and is inspired by biomimicry -- design inspired by nature's models and systems -- he says.
Clearly not someone lacking in imagination, Callebaut envisages his eco-airship towering 400 meters high, 180 meters wide and powered by a seaweed biofuel.

Eight compartments are housed inside a protective skin made of glazed canvas and carry fuel -- "bio-hydrogen," of course -- and passengers.
But this isn't just a floating theme park -- Callebaut envisions his airship helping with humanitarian missions or scientific studies as well as housing hotels and entertainment.

When it's not soaring to an altitude of 6,500 feet and reaching a top speed of 175 kilometers per hour, the airship is docked in a floating organic farm which recycles CO2. As with the airship, the farm is completely powered by renewable energy using solar panels and hydro turbines.
Callebaut's extraordinary plans for what he calls a "biotechnological prototype" are currently on display at the Future Pavilion at Expo 2010 in Shanghai, China.

"Hydrogenase" is the latest in an impressive portfolio of ecologically influenced ideas of how the future might look.

In 2008 he drew up plans for a "floating ecopolis" aimed at saving climate refugees and in 2007 the "perfumed jungle" imagined the construction of a vast jungle on the central waterfront in Hong Kong.
Posted by Steve Douglass at 9:05 PM No comments: