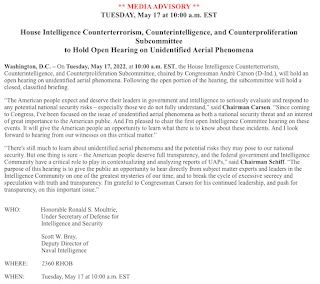 NYT;
A House subcommittee is scheduled to hold next week the first open congressional hearing on unidentified aerial vehicles in more than half a century, with testimony from two top defense intelligence officials.

The hearing comes after the release last June of a report requested by Congress on “unidentified aerial phenomena.” The nine-page “Preliminary Assessment” from the Office of the Director of National Intelligence focused on 144 incidents dating back to 2004 and was able to explain only one.

The report declined to draw inferences, saying that the available reporting was “largely inconclusive” and noting that limited and inconsistent data created a challenge in evaluating the phenomena. But it said most of the phenomena reported “do represent physical objects.”

The assessment concluded that the objects were not secret U.S. technology and that “we currently lack data to indicate any UAP are part of a foreign collection program or indicative of a major technological advancement by a potential adversary.”
The hearing, scheduled for next Tuesday, is intended to focus on the work of a group within the Pentagon that is following up on the national security and flight-safety questions raised by the report.

“Since this is an area of high public interest, any undue secrecy can serve as an obstacle to solving the mystery, or it could prevent us from finding solutions to potential vulnerabilities,” said Representative André Carson, Democrat of Indiana and the chairman of the House Intelligence Committee’s subcommittee on counterterrorism, counterintelligence, and counterproliferation, which is holding the hearing. “This hearing is about examining steps that the Pentagon can take to reduce the stigma surrounding reporting by military pilots, and by civilian pilots.”
READ MORE HERE
Posted by Steve Douglass at 7:29 AM No comments: