North Korea Quick To Use Clinton Mission As Propaganda 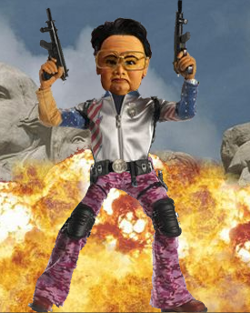 Report on Bill Clinton's Visit to DPRK Made Public


Pyongyang, August 5 (KCNA) --A report on Former U.S. President Bill Clinton's visit to the Democratic People's Republic of Korea is as follows:

During their stay Clinton and his party paid a courtesy call on Kim Yong Nam, president of the Presidium of the Supreme People's Assembly.

Clinton expressed words of sincere apology to Kim Jong Il for the hostile acts committed by the two American journalists against the DPRK after illegally intruding into it. Clinton courteously conveyed to Kim Jong Il an earnest request of the U.S. government to leniently pardon them and send them back home from a humanitarian point of view. 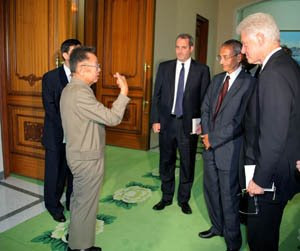 The meetings had candid and in-depth discussions on the pending issues between the DPRK and the U.S. in a sincere atmosphere and reached a consensus of views on seeking a negotiated settlement of them.

Kim Jong Il issued an order of the Chairman of the DPRK National Defence Commission on granting a special pardon to the two American journalists who had been sentenced to hard labor in accordance with Article 103 of the Socialist Constitution and releasing them.

Clinton courteously conveyed a verbal message of U.S. President Barack Obama expressing profound thanks for this and reflecting views on ways of improving the relations between the two countries.

The measure taken to release the American journalists is a manifestation of the DPRK's humanitarian and peaceloving policy.

The DPRK visit of Clinton and his party will contribute to deepening the understanding between the DPRK and the U.S. and building the bilateral confidence.


Pyongyang -- The Korean Central News Agency on Tuesday released a detailed report laying bare the facts about the crimes committed by the American journalists who were arrested for having illegally trespassed into the border of the DPRK and committed hostile acts against it for which they were tried.

According to it, at dawn of March 17 unidentified two men and two women covertly crossed the River Tuman to intrude into its
bank of the DPRK side in Kangan-ri, Onsong County, North Hamgyong Province. The two women were arrested on the spot.

The investigation proved that the intruders crossed the border and committed the crime for the purpose of making animation files to be used for an anti-DPRK smear campaign over its human rights issue.

The preliminary investigation proved that they had a confab on producing and broadcasting a documentary slandering the DPRK with Mitch Koss, executive producer of programming of the Current TV, David Neuman, president of programming, and David Harleston, head of the Legal Department of Current TV, and other men in Los Angeles, U.S. in January.

A trial of the accused was held at the Pyongyang City Court from June 4 to 8.
At the trial the accused admitted that what they did were criminal acts committed, prompted by the political motive to isolate and stifle the socialist system of the DPRK by faking up moving images aimed at falsifying its human rights performance and hurling slanders and calumnies at it.

The prison term is counted from March 22, 2009, when the accused were detained and it was pronounced that the judgment is unappealable.

The criminals admitted and accepted the judgment.

We are following with a high degree of vigilance the attitude of the U.S. which spawned the criminal act against the DPRK.

LINK
Posted by Steve Douglass at 8:22 PM No comments: 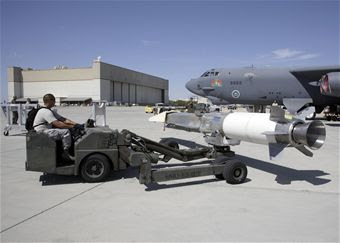 8/4/2009 - WRIGHT-PATTERSON AIR FORCE BASE, Ohio -- Airmen successfully mated the X-51A WaveRider flight test vehicle to a B-52 Stratofortress at Edwards Air Force Base July 17. The fit check followed integration earlier in the month of the Pratt & Whitney Rocketdyne scramjet propulsion system into the X-51 at Air Force Plant 42 in Palmdale, Calif.

The X-51 test vehicle is now back at the Boeing facility in Palmdale where additional systems integration and testing are taking place in preparation for its inaugural flight test in December, said Charlie Brink, X-51 program manager from the Air Force Research Laboratory's Propulsion Directorate at Wright-Patterson Air Force Base.

During the flight test, currently planned Dec. 2, the Air Force Flight Test Center's B-52 will carry the X-51A to 50,000 feet over the Pacific Ocean then release it. A solid rocket booster from an ATACMS missile will then ignite and accelerate the X-51 to about Mach 4.5. Then the supersonic combustion ramjet propulsion system will propel the vehicle for five minutes to more than Mach 6. Hypersonic combustion generates intense heat and routing of the engine's own JP-7 fuel will help keep the engine at the desired operating temperature.

Engineers expect a great deal will be learned about hypersonic flight during the nearly 300 seconds under scramjet power. The longest-ever previous scramjet test, lasted only about 10 seconds, Brink said. As the engine ignites it will initially burn a mix of ethylene and JP-7 before switching exclusively to JP-7 fuel.

"The heart of this aircraft is its engine," said Brink. "We're really breaking new ground in our understanding of hypersonic propulsion, but our four planned test flights will also enhance our knowledge of airframe-engine integration, high-temperature materials and other technologies. Together they will help us bridge air and space." 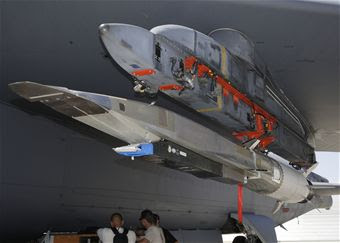 Data from the flight will be telemetered back to Edwards before the X-51A test vehicle plunges into the Pacific.

Two B-52 flights, one captive carriage and one dress rehearsal, are planned this Fall prior to the X-51's first powered flight scheduled in December, Brink said.

The X-51A WaveRider program is a joint effort by the U.S. Air Force, DARPA, Pratt & Whitney Rocketdyne, and Boeing. 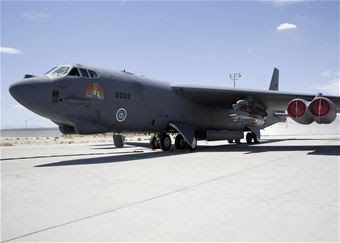 Posted by Steve Douglass at 7:28 PM No comments:

KC-135 lands safely after fumes in cockpit: "BANGOR, Maine — An Air National Guard refueling tanker is back on the ground after reporting either smoke or fumes in the cockpit.An airport spokeswoman says the KC-135 landed safely at Bangor International Airport around 12:30 p.m. after declaring an emergency.Bangor is home to the Maine Air National Guard’s 101st Air Refueling Wing.It’s not clear what the plane’s mission was, but KC-135 tankers are used to refuel military aircraft coming and going from Europe."

Posted by Steve Douglass at 7:16 PM No comments:

Russia subs cruise U.S. side of Atlantic: "Two Russian attack submarines have been cruising in the Atlantic off the East Coast of the United States, a senior defense official said Wednesday.

Posted by Steve Douglass at 7:15 PM No comments:

Hypersonic Test Flight Targeted For December: "The hypersonic vehicle is designed to be first air-breathing craft to demonstrate sustained speeds in excess of Mach 4"

Posted by Steve Douglass at 7:14 PM No comments: 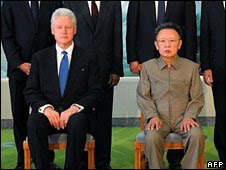 By Glenn Kessler
Washington Post Staff Writer
Thursday, August 6, 2009
Former president Bill Clinton's central role in the return of two journalists detained by North Korea has once again cast a spotlight on his vast web of financial and political contacts, a network that troubled senators who weighed whether to confirm his wife as secretary of state.

In the case of the detainees, Clinton tapped wealthy business people to execute a mission that, without a special federal waiver for the aircraft to travel to North Korea, would have been illegal. A few weeks ago, one of his business contacts had the ear of Hillary Rodham Clinton in her role as secretary of state, an uncomfortable reminder of the former president's far-flung interests and associates.

The intersection of power and connections blurred the exact nature of Bill Clinton's trip to North Korea. He agreed to meet with leader Kim Jong Il two days after North Korea called his wife a "primary schoolgirl" because she had likened the country to an unruly child. The Obama administration took pains to distance itself from the mission, though officials conceded they had repeated contact with North Korean officials in the days leading up to the trip to confirm the journalists would be released if the former president traveled to Pyongyang.

Hillary Clinton, who was touring Africa while images of her husband meeting with Kim flashed on television sets around the world, felt compelled to address the conflicting messages when she spoke with NBC from Nairobi on Wednesday. "I want to be sure people don't confuse what Bill did, which was a private humanitarian mission to bring these young women home, with our policy, which continues to be one that gives choices to North Korea," she said. "Our policy remains the same."

But, in sign that diplomatic benefits may flow from her husband's missions, she wavered, saying: "Perhaps they will now be willing to start talking to us."

No taxpayer money was used to fund the trip, with the exception of the salaries of the Secret Service agents traveling with Clinton. But the former president procured aircraft and crews by tapping companies and contacts that have previously underwritten his endeavors. With some assistance from the Obama administration, he handpicked the team that would accompany him, according to sources involved in the planning.

Dow Chemical, which has contributed as much as $50,000 to the William J. Clinton Foundation, provided the plane that ferried the former president from his home in Westchester County, N.Y., to Burbank, Calif. There, he boarded an all-business-class Boeing 737 jet provided by wealthy Hollywood producer Steve Bing. Clinton was accompanied by a team that included John D. Podesta, who was his White House chief of staff, and a former State Department expert on North Korea.

Dow Chemical spent nearly $3 million lobbying in Washington in the first half of this year. Its lobbying reflects its wide-ranging interests: The national health care overhaul, transportation funding, chemical plant security, trade and shareholder rights, taxes and pension funding are among the issues it weighed in on.

Bing, who is one of the biggest donors to the Clinton Foundation, with gifts totaling $10 million to $25 million, will foot an estimated $200,000 bill for the fuel, the crew and other incidental expenses for the trip, said Marc J. Foulkrod, chairman of Avjet in Burbank, which manages the plane for the executive. Bing, who is also a major donor to Democratic causes, declined to comment on his involvement in the Clinton trip, a spokesman said, saying Bing does not talk to the media.

Foulkrod said the trip was especially difficult to arrange because Federal Aviation Administration regulations prohibit U.S.-registered aircraft from landing in North Korea. He said that the company received a call from Bing about the flight either late last Thursday or early Friday, and that it took "an unprecedented level of cooperation" from the FAA and the State Department to secure the necessary legal and diplomatic approvals in time for Monday's departure.

The administration had wanted to send former vice president Al Gore to North Korea instead of Clinton; Gore is a co-founder of Current TV, which employs the journalists who were detained. But North Korean officials hinted that they wanted an envoy of Clinton's stature, sources said.

The breakthrough in the standoff over the journalists -- who were sentenced in June to 12 months of hard labor after being seized near the Chinese border in March -- came on July 18, when the reporters told their families in a phone call that North Korean officials had clearly stated that they would be released if Clinton came to Pyongyang.

U.S. officials immediately began to verify that statement with North Korean counterparts, and on July 24 national security adviser James L. Jones asked Clinton to consider making the trip. One senior administration official said full assurances from Pyongyang were not secured until Sunday, the day the former president left Burbank on Bing's jet. At the time of departure, U.S. officials knew that Clinton was scheduled to have a rare meeting with Kim.

Gore praised Bing at a news conference after the plane landed. "To Steve Bing and all the folks who have made the flight possible, we say a word of thanks, deep thanks as well," he said. The journalists thanked Bing and also Dow and Andrew Liveris, the company's chief executive -- who also is a member of the Clinton Global Initiative, another one of the former president's projects.