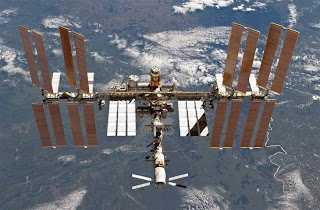 The International Space Station has experienced a "serious" problem with its cooling system, NASA said.

A problem with one of the International Space Station's cooling systems may require a repair spacewalk, NASA told announced Wednesday.

The situation doesn't represent a life-threatening emergency, but it has required a cutback in normal operations on the orbiting outpost, NASA spokesman Josh Byerly said.

One of the station's two cooling loops, known as Loop-A, shut down due to an anomalous temperature imbalance on Wednesday, Byerly told NBC News. That forced NASA to reroute coolant systems onto Loop-B. As a result, the station's six-person crew has to prioritize life support systems, electrical systems and science experiments — including the freezers that preserve samples. Some non-critical systems were shut down, Byerly said, but external electrical equipment is still working fine.

"The crew was never in any danger," Byerly said. "They worked to keep the freezers going. ... They're fine for the near future."

Byerly said engineers think the problem was caused by a malfunctioning flow control valve for the station's ammonia coolant. Mission managers are trying to determine whether a software fix can get the valve working again, or whether a spacewalk will be required. Sorting through the issues might take a couple days, or as much as a couple of weeks.

U.S. spacewalks were suspended after Italian astronaut Luca Parmitano's spacesuit filled with water during a July outing, but Russian spacewalks have proceeded without problems.

Check back for more about this developing story.
Posted by Steve Douglass at 3:28 PM No comments:

WASHINGTON TIMES: Freedom of Information request filed by government watchdog Judicial Watch revealed that former CIA Director Leon E. Panetta was the source who gave up secret information to the scriptwriter of “Zero Dark Thirty,” the Hollywood movie about the raid on Osama bin Laden.

Judicial Watch said in an email that Mr. Panetta revealed the classified information during an awards ceremony on June 24, 2011, to mark the administration’s assault on Osama bin Laden. Mr. Panetta was giving a speech at the ceremony, during which he concluded: “You have made me proud of the CIA family. And you have made me proud as an Italian to know that bin Laden sleeps with the fishes.”

Hollywood’s Mark Boal, who produced “Zero Dark Thirty,” was at this awards ceremony. According to internal documents from the CIA received by Judicial Watch as part of the group’s FOIA request, Mr. Panetta’s entire speech was classified “Top Secret.” And Mr. Panetta shouldn’t have spoken those words in front of Mr. Boal, who didn’t have a top security clearance, Judicial Watch reported.

Mr. Panetta said he didn’t know Mr. Boal was in the audience during his speech and assumed all those who were at the ceremony had the proper security clearances, Judicial Watch reported.

The most egregious part of the intelligence slip was that Mr. Panetta “specifically recognized the unit that conducted the raid and identified the ground commander by name,” a draft Pentagon inspector general’s report stated, Judicial Watch reported.

And the leak caused some consternation on Capitol Hill.

Rep. Peter T. King, New York Republican, accused the CIA of being “very sloppy” and called the administration “very sloppy in enforcing security procedures when it came to Hollywood. It almost seems as if they were star-struck.”


Posted by Steve Douglass at 1:36 PM No comments: