STS-119 launched tonight and we had a rare opportunity to see it flying over Texas before it went into a higher orbit and during an engine burn. At the time these photos were taken the shuttle was about over Abilene, at 72 miles up. I used a 300 mm Nikkor zoom lens with 2X converter and with a lot of processing was able to get these shots of the shuttle's belly.

In this first shot you can even make out the shape of the shuttle and which end is the pointy end, despite the blooming reflection of the setting sun. 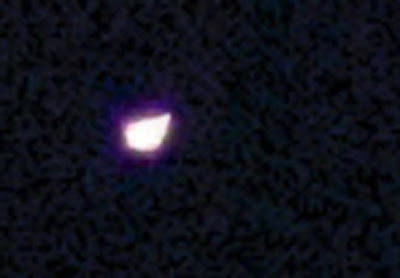 In this next shot you can see that the orbiter has turned a bit as the nose is swinging from right to left. 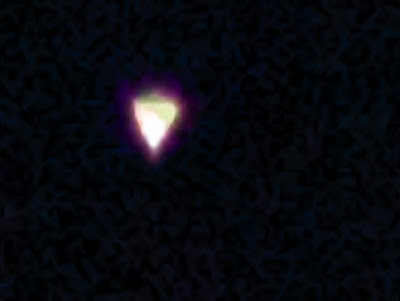 This last shot was taken as the orbiter was almost out of site with the shuttle completely turned around and a green flash which I think is possibly the planned engine burn that will put the shuttle into a 150 mile high orbit. 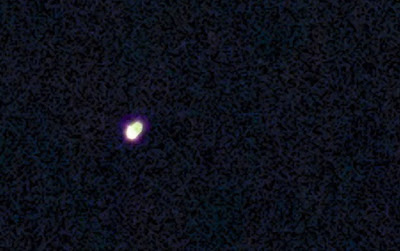 -Steve
Posted by Steve Douglass at 8:02 PM No comments:

Email ThisBlogThis!Share to TwitterShare to FacebookShare to Pinterest
Labels: STS-119 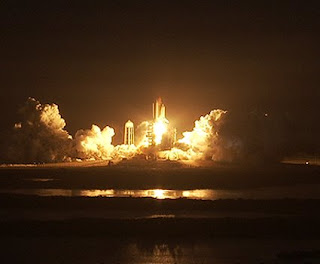 Space shuttle Discovery has cleared the launch tower! It is tracing a brilliant arc of white and orange flames through the dusky-night sky on its way to orbit.

The twin solid rocket boosters will burnout shortly and fall away as Discovery continues its climb powered by its three main engines. Once in orbit, it will take Discovery about two days to catch up to the International Space Station.

The astronauts of STS-119 are to install the last major set of solar arrays to the orbiting laboratory complex during the mission.

Japan's Koichi Wakata also will switch from the shuttle to the station crew and current station crew member Sandra Magnus will become a member of the Discovery crew.
Posted by Steve Douglass at 5:00 PM No comments:

Navy NP-3D Orion will fly below Discovery during re-entry

This flight experiment is designed to demonstrate that a protuberance
on a BRI-18 tile is safe to fly. BRI-18 is a tile originally
developed as a potential heat shield upgrade on the orbiters and is
being considered for use on the Orion crew exploration vehicles. Due
to Orion's geometry, the tiles would experience re-entry heating
temperatures up to 3,400 degrees Fahrenheit, about 500 degrees higher
than the 2,900 degrees experienced by shuttles.

Tested successfully in arc jet facilities, this phase of the
experiment will gather information on the effect of high Mach number
boundary layer transition caused by a protuberance on the space
shuttle during the re-entry trajectory. Boundary layer transition is
a disruption of the smooth, laminar flow of supersonic air across the
shuttle's belly and occurs normally when the shuttle's velocity has
dropped to around eight to 10 times the speed of sound, starting
toward the back of the heat shield and moving forward. Known as
"tripping the boundary layer," this phenomenon can create eddies of
turbulence that, in turn, result in higher downstream heating.

For the experiment, a heat shield tile with a "speed bump" on it was
installed under Discovery's left wing to intentionally disturb the
airflow in a controlled manner and make the airflow turbulent. The
bump is four inches long and 0.3 inch wide. Ten thermocouples will be
installed on the tile with the protuberance and on tiles downstream
to capture test data. The experiment will receive additional support
from a U.S. Navy aircraft that will check the orbiter's exterior
temperatures. A Navy NP-3D Orion will fly below Discovery during
re-entry and use a long-range infrared camera to remotely monitor
heating to the shuttle's lower surface. The imagery captured and
recorded will complement the information collected by the on board
instruments. Both will be used to verify and improve design efforts
for future spacecraft.